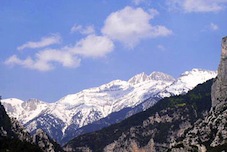 A documentary is going to be filmed on the holy mountain Olympus by Austrian director Stefanus Domanig, from August until September. The mountain is located in northern Greece, near Salonika Bay.

The director visited the area a few days ago and was impressed by the beauty of the nature and the hospitality of the locals. He mentioned that he found in Greece what he was looking for. The director is totally pleased with the maintenance of the memorials and the combination of sea and mountain terrain in the area.

The documentary will include the locals and the holy mountain of the twelve Gods. It will also include an insight into the local cuisine, what locals consume and how they live in a mountainous location.

The documentary is part of a general production covering unique issues such as Olympus and other locations in France, Germany, and Switzerland.  It is expected to promote the Greek beauty abroad, something which is necessary at this period of time.