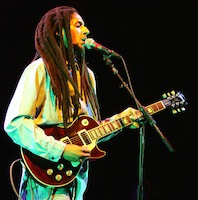 Julian “Ju Ju” Marley, son of reggae legend Bob Marley, will be bringing his band ‘The Uprising” to Greece this August. Julian Marley who will be touring throughout Europe on his ‘Awake ‘ world tour, will be performing in Italy, France, Germany, Sweden, Morocco, Poland, Israel and Portugal. He has also extended his tour to include performances in Greece at venues on Santorini, Ios, Naxsos, Antiparos, Aigina, and in Nemea, Erateini, New Makri, Kulini and Aeropoli.
Following in his father’s footsteps, Julian is a roots-reggae muscian, singer-songwriter, producer and humanitarian. His music is inspired by life and spirituality and after having been exposed to music all his life, he has himself become a talented artist. He is a self-taught muscian, who mastered the bass, drums, guitar and keyboards from a very young age.
Julian, was born and raised in the UK by his mother Lucy Pounder, but often visited his family and brothers in Jamaica. At the age of five, he recorded his first demo at the Marly family home in Kingston, Jamaica. He was frequently surrounded by reggae veterans such as Aston ‘Family Man’ Barrett Carlton Barrett. Earl ‘Wire’ Lindo, Tyrone Downie and Earl ‘Chinna’ Smith, whom he studied with and gained inspiration from throughout his teenage years.
In 1993, he eventually moved to Jamaica to be with his brothers and from then on, embarked on his musical career with his siblings. Three years later, he was already in the public eye with his debut entitled ‘Lion in the Morning’.
Although, Julian holds Jamaica in his heart, he has widely credited his British upbringing as a deep influence on his musical career. He claims, “Growing up in London, remains a large part of who I am today. Musically, I have become increasingly aware of how self-motivating the history of the UK Reggae scene has been on my work. I feel privileged to be part of the musical roots that my father laid in England, and as the next generation of British born Reggae artists, I look forward to relating the cultural gifts that have been bestowed on to me back onto the UK music scene through my musical creations, visions and contributions”.
Julian Marley & The Uprising will be on tour in Greece on the following dates and at venues:
* Tuesday, August 10 – Panaugiakos Court, Santorini
*Wednesday, August 11 – Odisseas Theatre, Ios
* Thursday, August 12 – Panaksiakos Court, Naxsos
* Saturday, August 14 – Antiparos Court, Antiparos,
* Sunday, August 15 – Aigina Beach, Aigina
* Tuesday, August 17 – Theatre of Nemea, Nenea
* Wednesday, August 18 – Erateini Beach, Erateini
* Thursday, August 19 – Divers Beach, New Makri
* Friday, August 20 – Kulini B each Bar, Kulini
* Saturday, August 21 – Apnei Club, Aeropoli
For furthe information on tour, contact: www.julianmarley.com/news.php