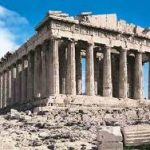 Five metopes of the Parthenon have been discovered in the South wall of Acropolis. According to “Eleftherotypia” daily, the archaeologists claim that the metopes have been placed in the 18th century, when the Acropolis wall was being repaired. The experts discovered the metopes, while processing 2250 photos with modern photographic methods.

The metopes found, are different from the other panels, as they are made of marble from the area of Penteli. Until recently the archaeologists used to believe that those metopes had been destroyed during the Morosini explosion of the Parthenon, in 1678.