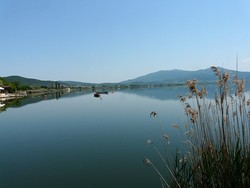 The European Commission decided Thursday to take Greece to the European Court of Justice for failing to preserve one of the country’s most important protected wetlands.
Lake Koroneia, an internationally important wetland in the North East of Greece, has suffered from pollutant discharges as well as from an extensive illegal water abstraction for irrigation, thus making fishing and bathing no longer possible and endangering the local fauna and flora.
Lake Koroneia is part of the Natura 2000 network, Europe’s network of protected natural areas, and is protected under the European Union (EU) law.
The lake region, which shelters many bird species, experienced a real natural catastrophe in 2004, when thousands of birds were found dead around the lake.
In 2004, the EU agreed to co-finance Greece’s action plan to rehabilitate and protect the wetlands, provided that the Greek authorities could take concrete measures to close illegal boreholes and control discharges of waste water into the lake.
But as Greece failed to put the measures into practice, the European Commission announced its decision on Thursday to take Greece to court, but also to decide whether the EU co-financing would continue.
(Source: Xinhua)