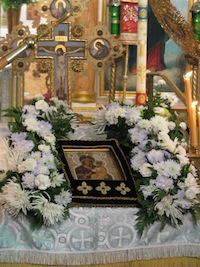 Usually, we think of Hawaii as honeymoon central with its blue waters, sunny beaches, exotic wildlife and swaying palm trees. But the youngest state in the union has something that newlyweds or vacationers likely don’t expect to see there: a miraculous, myrrh-streaming icon of the Virgin Mary holding the Christ child.
The Hawaiian Myrrh-Streaming Icon of the Iveron Mother of God, usually housed in a small Orthodox Christian mission church in Honolulu, is making a trip to the mainland with a stop at St. George Greek Orthodox Church in Bakersfield from Jan. 28 to 30.
Hawaii’s myrrh-streaming icon is actually a copy of the original housed for a millennium at the Iveron Orthodox Christian Monastery, located on the peninsula of Mount Athos in northeastern Greece. Tradition teaches that the prototype was painted by St. Luke the Apostle and Evangelist in the first century. Other copies have been produced in Moscow and Montreal and some of them also stream myrrh, sweet-smelling oil used by royalty in the ancient world for the best perfumes. It was also one of the three gifts presented by the Magi to the baby Jesus.

St. George’s pastor, Father Joseph Chaffee, explains that myrrh-flowing icons have been part of the Eastern Orthodox Church from antiquity.
“They are ‘windows to heaven,’ pictures of our exemplary brothers and sisters of the Church triumphant who are inspirations for the Christian life,” Father Joseph said. “The glorified saints depicted in these icons are given honor and a ‘holy kiss,’ but not ever shown worship because that is reserved for God alone. Miraculous icons are considered signs from heaven to strengthen the faithful, especially in difficult times.”
Hawaii’s icon began streaming in 2007, around the start of the financial crisis.
The icon’s guardian, Nectarios Yangston, said the icon filled his home with the scent of thousands of roses. He immediately made the sign of the cross and offered a prayer service in honor of the Virgin Mary. Yangston then called his parish priest who carefully inspected it and verified the myrrh to be genuine. The Orthodox Church has officially recognized the icon as miraculous.

The first person known to be healed through this holy icon was Yangston’s own sister, for whom he prayed at the first sight of myrrh. Her doctor said that her pancreas inexplicably had returned to its normal state and her diabetes was under control. Numerous healings from cancer, organ failure and other ailments have been documented. Recently, while the icon was in Tucson, Ariz., a young boy blinded in a tragic accident had his sight miraculously restored after being blessed by the icon.
Such a powerful item is actually quite small in stature. Made in Russia, the Hawaiian icon is a 7-inch-by-9-inch paper reproduction laminated on a board one inch thick. It is still big enough for all to come and receive a blessing. Father Joseph says everyone is welcome to visit the icon and be anointed with the myrrh.
(source: bakersfield)