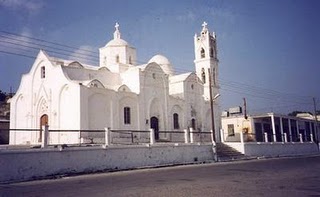 Turkish forces in the occupied area of Karpasia in Northern Cyprus have presented a new challenge regarding the celebration of Christmas by Christians living in the territory. For the first time in 36 years Christians trapped in the occupied area were forbidden from celebrating Christmas.
On Christmas morning, Saturday 25 December 2010, Father Zacharias and a large number of people went to the Church of Saint Sinesios in Rizokarpaso (photo) to begin Matins for Christmas. Meanwhile men of the occupied forces rushed to the church, interrupted the service, urged the priest to remove his vestments, and ordered everyone leave the church. When everyone had left, the doors were sealed.
The same happened in the Church of the Holy Trinity where Father Konstantinos was serving.
Archbishop Chrysostomos of Cyprus was saddened by the provocative attitude of the occupied forces.