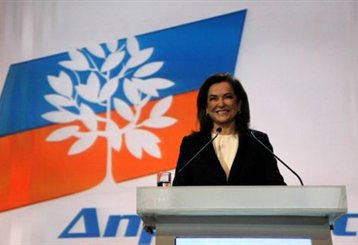 Independent member of the parliament and former New Democracy (ND) Foreign Minister Dora Bakoyannis formally announced the founding of her new “Democratic Alliance” political party on Sunday. The party’s symbol is an olive tree in blue and orange.
At an event at the Olympics Badminton facility, Bakoyannis invited the 5,000 participants to sign the new party’s Founding Declaration.  She described her party as an: “independent, participational democratic movement”.
Outlining the Democratic Alliance’s fundamental principles and values, Bakoyannis said the party is opposed to new taxes institution of a single tax rate in the region of 20%.  She stressed that it will pursue national understandings and agreements on reducing the number of civil servants.  She wants the public sector to function with two-thirds of its current manpower over the next decade.
She also spoke of a second social security reform and the institution of a constitutional fiscal regulation that would ensure balanced budgets. She also criticised ND and its leader over their stance on the Memorandum.
Bakoyannis made it clear that her party is determined to clash with the: “phenomena of intransparency”.  She defended her decision to vote in favor of Greece’s resorting to the European support mechanism, which differentiated her from the main opposition party’s official stance that led to her leaving ND. “I disagreed, and disagree, with many of the measures and regulations contained in the Memorandum, but at that time last May, the dilemma was merciless for everyone: approval of the support mechanism or immediate default”.
Bakoyannis further announced that the new Democratic Alliance party’s inaugural congress will be held in March.
(source: ana-mpa)