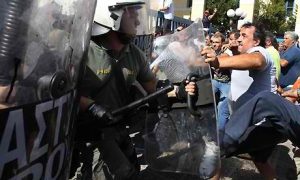 With fuel shortages stranding thousands of tourists and disrupting supplies of food and medicines nationwide, Prime Minister George Papandreou resorted to emergency legislation; generally used at times of war or great natural disaster to end the walk-out.
Facing prosecution unless they return to work, the drivers say they will not directly defy the emergency civil mobilization order but will continue their protest with various forms of disobedience. Today approximately 500 drivers gathered in protest outside the Transport Ministry. Bottles were hurled at the Ministry as drivers tried to climb the gates and get inside but the incident ended quickly when the police fired tear gas.
The drivers are protesting the government’s failure to consult with them over the details of a draft law that seeks liberalize their sector in line with European Union regulations. In the case of truckers,which is the first group to be tackled, it will mean that new licences will be issued at lower costs and in greater numbers. The sector wants the government to delay the introduction of a bill to allow for more dialogue with the industry.