Last night, the celebratory commemoration of the national French anniversary came to an end with Sakis Rouvas singing the Greek as well as the French national anthems accompanied by a piano played by the Greek composer Dimitris Kontopoulos.
The Greek Government was represented by the under-secretary for Infrastracture Nikos Sifounakis, while some former presidents of the republic, Kwstis Stefanopoulos and Xristos Sartzetakis, were present as well. Numerous former ministers like Savvas Tsitouridis, businessmen, diplomats and a large number of audience enjoyed the Greek singer and the beautiful night. 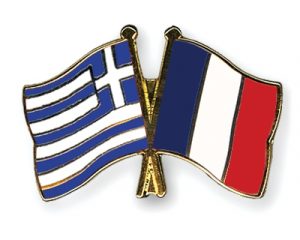 The French ambassador, Kristof Farneau, spoke about Greece and his words were more than complimenting. He referred to the “courage and the determination”     that Greece showed, as it took really hard measures. He also     noted, that France supported the Greek       Government from the beginning of the fiscal crisis. “Once more, we had  created a “Greece- France – alliance”, something that is obvious from the regular exchanges between the two countries as well as the two meetings between Sarkozi and Papandreou in Paris,  that were realized in February and March. “, said the ambassador, being really fluent in Greek.
The French solidarity is based on the fact that this crisis is not only Greek, but it consists a credibility test for the European structure in whole. Finally, Farneau, noted that the following months will be difficult not only for Greece but also for France and Europe and hopes that  next year will bring happines and reassurance to everybody.