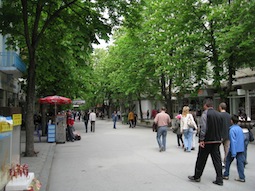 Thousands of Greek shoppers are invading the border towns in Southwest Bulgaria and their numbers keep increasing as because of the inflation in their country.
Gotse Delchev, Petrich and Sandanski (photo), three towns of some 20 000 inhabitants each, are the main beneficiaries from the economic troubles in Bulgaria’s southern neighbor, reported the Standart Daily.
Four hypermarket chains have opened stores in the town of Gotse Delchev alone since the beginning of the economic crisis in Greece – the German-owned Penny Market and Plus and the Bulgarian Valan and Stodzha – and the construction of a modern shopping mall is underway and scheduled to be done by September – an otherwise unlikely phenomenon for a small provincial Bulgarian town.

The long lines of Greek cars and buses flocking to Bulgaria are said to have become even longer after the VAT in Greece went up by two more percent as of July 1. The Greek shoppers are mostly from the cities of Drama and Kavala.
The residents of the town of Petrich are said to be comparing their town to something like a “Klondike” for the people of Northern Greece.
Greek shoppers are quoted as saying that they have been buying not just consumer goods but also gas from Bulgaria for several months now. Many also have Bulgarian dentists in Petrich because it is much cheaper.

“There is no way we can be gloating about the economic plight of the Greeks. But we are also happy that they are coming to shop here because the truth is that our towns will be dead without them,” say merchants from the town of Sandanski.