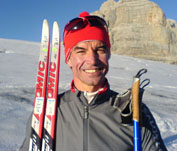 The Greek father-daughter combination of Athanasios Tsakiris and Panagiota Tsakiri suffered a disappointing start to the Vancouver Olympics when they failed to make an impression on their opening events.
Panagiota Tsakiri finished in 86th position in the women’s 7.5 kilometre biathlon sprint.
After the first round of prone shooting she lay in 80th, picking up one penalty. She has slipped to 87th after the second standing shooting where she picked up two further penalties.
However, she was able to overhaul Spain’s Victoria Padial Hernandez to finish in a time of 24:28.8 – almost five minutes behind the winner Anastazia Kuzmina of Slovakia.
Magdalena Neuner of Germany was second with France’s Marie Dorin taking the bronze.
Her father Athanasios (foto) fared less well in the men’s biathlon 10k sprint as he failed to finish in difficult conditions.
The 45-year-old, who carried the Greek flag at the opening ceremony, struggled from the start and was already well off the pace after the prone shooting.
The race had started in fine weather but by the time Tsakiris, wearing bib number 52, went out it, conditions had worsened considerably, something that blighted the chances of some of the podium prospects, notably nine-time Olympic medallist Ole Einar Bjoerndalen who could only struggle in in 17th.
By the time Tsakiris had completed the standing shooting he was over five minutes back, the snow was falling heavily and he did not finish.
The race was won by Vincent Jay of France in a time of 24:07.8. Norway’s Emil Hegle Svendsen took the silver and Jakov Fak of Croatia the bronze. body
(source: sport in greece)