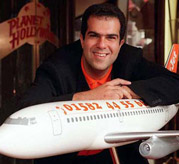 Easyjet founder Stelios Haji-Ioannou’s guilty conscience is set to be a boon for some Cypriot businesses, as long as they are able to bridge the chasm dividing the island’s Greek and Turkish communities.
Haji-Ioannou, whose family is from Cyprus, is offering financial aid to businesses to help foster closer cooperation between its estranged communities. Beneficiaries must be ventures jointly run by Greek and Turkish Cypriots — a rare breed on an island split for decades.
“Its the multiplier effect. If I can encourage these teams to break down the barriers between communities they may change the landscape on the island,” Haji-Ioannou told Reuters.
Better known as the founder of the no-frills budget airline and a host of spin-off brands distinctive for their in-your-face orange logo, Haji-Ioannou is willing to pay out up to one 1 million euros ($1.5 million) of his own funds to assist business projects.
Over the next four years his philanthropic foundation will be offering five grants annually, each worth 50,000 euros.
Haji-Ioannou, the son of a shipping magnate, says spending is partly his way of assuaging a guilty conscience for being born rich.
“Every rich person has a debt to repay to society, and I was a rich kid too so I feel twice as guilty,” he said, half jokingly.
In a hip cafe with not a hint of burned orange in sight, nine teams of entrepreneurs gave brief presentations after being shortlisted from 46 applicants. The 10th team did not show up. “Their loss,” Haji-Ioannou shrugged.
Cyprus was split in a Turkish invasion in 1974 triggered by a brief Greek inspired coup. Trade between the two sides is regulated by European Union directives and is limited.
Applicants included consultancy projects; two Cypriot women, a Greek Cypriot and a Turkish Cypriot, who believe there are countless business opportunities to be had from reuniting Cyprus.
“Our vision is to contribute to the reunification of our country, and with our research, demonstrate peace is more profitable than war,” said economist Ozlem Oguz.
Cyprus could, says her partner Praxoulla Antoniadou-Kyriakou, see its gross domestic product rise by three percentage points in real terms in the first five years after reunification, and annual income per family rise by 12,000 euros on average.
Greek Cypriot Christakis Varnava and Turkish Cypriot partner Unsal Ozbilenler believe there is money to be made in the humble spud.
“Our business is to teach people how to grow different varieties of potatoes,” Varnava told a panel of judges. “It may sound easy, but it’s not.” Ozilenler added: “We have the best potatoes in the world.”
After a vetting process, Haji-Ioannou will announce beneficiaries on December 18. “After that it’s no questions asked,” he said. “Though I hope that they don’t go out and buy a (sports car) with the money.”
(source: reuters uk)