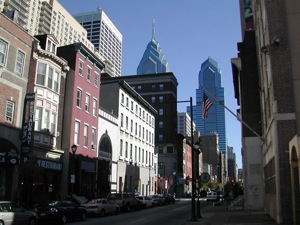 Chicago had the strong tight Outfit that controlled almost every aspect of the “Windy City” while Philadelphia had its loose knit Greek crew. Even though Philly was to some degree managed by the New York Families (reportedly the Gambinos) they controlled a major drug pipeline stretching to Florida. Yet way before the drug market surfaced Philly was almost immune to rampant violence. The boss at the time was Angelo Bruno, who was known as the “docile don” because he ran his Family through negotiation not violence. For nearly three decades Bruno held the Philly mob on the same power base as some New York Families. But that soon came to a screeching halt when an exiled mobster Nicky “Little Nicky” Scarfo orchestrated the execution of his boss, Angelo Bruno on March 21, 1980.

That execution triggered one of the most violent mob wars in history. Loyalists to Angelo Bruno were vying for control while the “new order” was trying to take over. The new order eventually won and the new defacto boss was Nicky Scarfo. In the mist of this entire racket was Greek mob boss Steve Bouras and Harry Peetros. The Greeks controlled a vast market for drugs and during the Bruno years were under his protection. Harry Peetros was a powerful loan shark in the Philly area and operated under the wing of the Italians as did Bouras. But after the transfer of power to Scarfo their carefree days were soon numbered.

As their counterparts in other cities like New York, Texas and New Jersey their power base was not as solid. Philly was almost open territory to many mobs. But New York had a more solid foot hold in it because of Atlantic City. Atlantic City was an open city until the Philly mob took most it under its control. Nicky Scarfo made sure of that. But the New York crews made their presence known. The Greek mob had their fingers in A.C. through wise guys like Nick the Greek and the Bouras brothers.

As the Scarfo power surge came to reality so was the decline of the Greek mob. Scarfo wanted total control of the rackets in Philly. On May 27th 1981 Steve Bouras was quietly seated at the Meletis Restaurant with several friends including Scarfo confidant Raymond “Long John” Martorano, when suddenly gunman entered the establishment. They motioned Raymond and the others out of the way. They then opened fire on Bouras, his girlfriend Jannette Curro was also killed. The laissez-fare era of Bruno was over; Scarfo wanted a piece of everyone. Harry Peetros was gunned down a few months earlier. Speculation that this was a revenge hit for Peetros was declined. The Greek mob soon came under control by Scarfo which then diminished due to Nicky’s rough house ways. But even today after Scarfo’s imprisonment the Philly mob is not even close to what it was during the Bruno days.