Greece is becoming a European hub of liquefied natural gas (LNG) as demand grows in the wake of the war in Ukraine, PM Kyriakos Mitsotakis told an international conference on LNG held in Athens on Wednesday.

Mitsotakis presented the new infrastructures that have been implemented or are being built and which allow for an increase in natural gas exports.

Currently, major LNG-related projects – either under construction, expanding, or being planned – are underway at five locations around Greece. Within the next two years, those projects could more than double the country’s capacity to handle world shipments of LNG.

The various projects – two near the town of Alexandroupolis in northern Greece, one near Volos in central Greece, and two near Athens – come as Europe dramatically increases its imports of LNG to replace Russian natural gas. 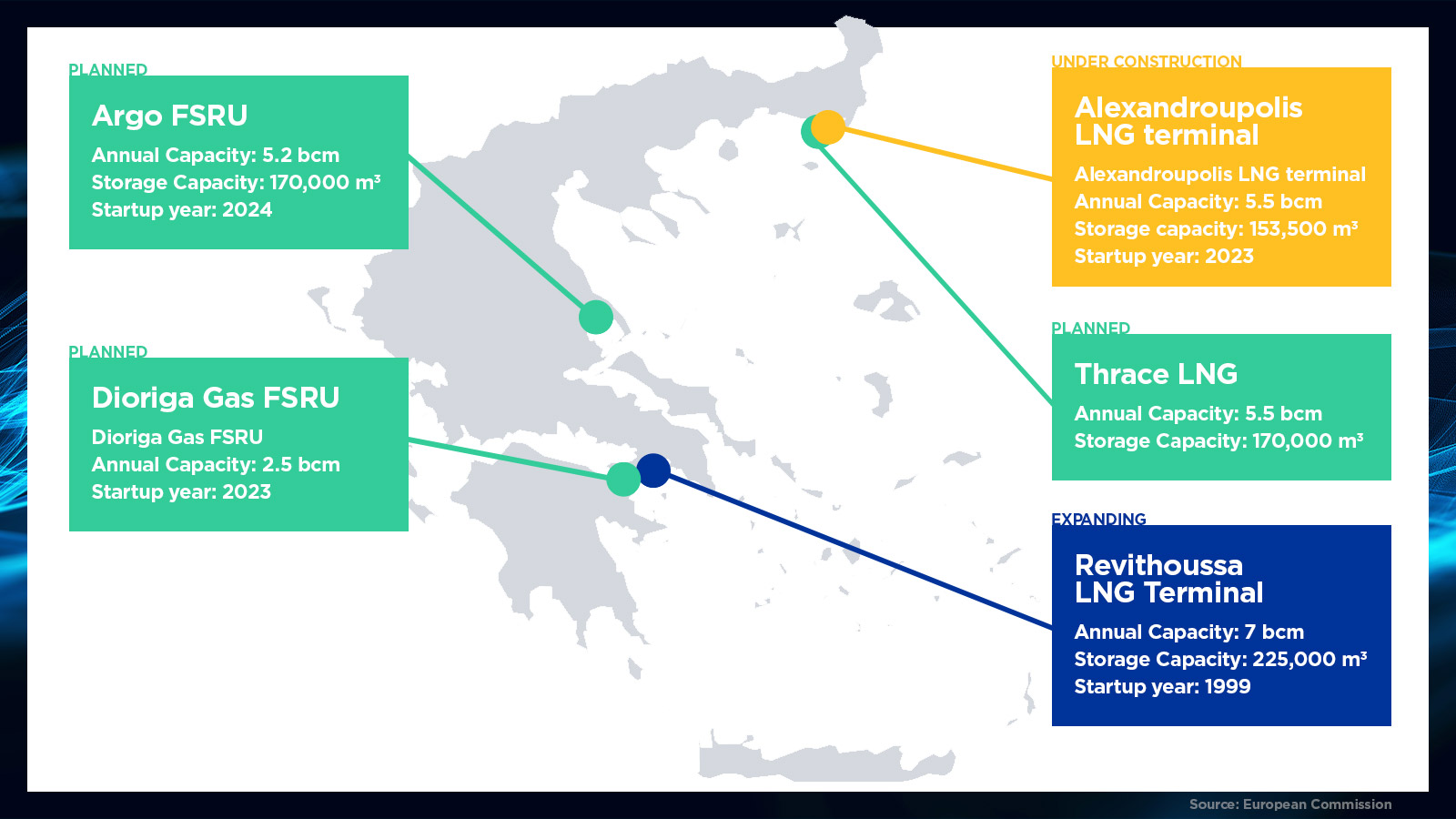 So far this year, the European Union has imported some 100 billion cubic meters (bcm) of LNG – a more than 60% increase from a year ago and an all-time record, according to European Commission data.

“The crisis is changing the energy map of Europe and Greece is at the forefront of this change,” Mitsotakis said at the conference.

“In a few years, we may have 2, 3 or even 4 floating LNG stations. We want to help our neighbours to diversify their energy supplies and to improve the stability associated with energy security,” he stated.

He finally noted that Europe, as Greece is already doing, should proceed with the exploration of hydrocarbon deposits to ensure energy supply at a reasonable cost without affecting the transition to a green economy.

“We need innovative solutions to ensure energy security now, without undermining the path to decarbonization,” the prime minister concluded.

Greece’s sole operational LNG regasification and storage terminal on the Revithoussa islet off Athens has played a pivotal role in the country’s strategy to wean itself off Russian gas and boost the security of supplies ahead of winter.

The country has already cut Russian gas imports by more than half this year thanks to increased deliveries from other producers to the Revithoussa facility, which is 5 miles (40 km) from Athens and can store 225,000 cubic metres of gas and regasify 1,400 cubic metres per hour.

New floating storage and regasification units (FSRUs) in Greece are planned at:

Gastrade, owned by Greece’s Copelouzos family, is developing an FSRU which will be anchored about 18 kilometres off the northern Greek port of Alexandroupolis, carrying gas to shore via a 28-kilometre-long pipeline. It is expected to carry gas to Bulgaria and further to the north once it starts operations by the end of 2023.

Gastrade has said it is examining the construction of a second FSRU off Alexandroupolis.

Mediterranean Gas plans to build an FSRU off the port of Volos, in central Greece. It has invited LNG producers, traders, large-scale consumers, industrial users and marine and shipping companies to submit non-binding interest in booking capacity by Dec. 19.

The facility, which will have an annual regasification capacity of 5.2 billion cubic metres, will carry gas to North Macedonia, Bulgaria, Romania, Albania, Italy and the rest of Europe.

It is targeting commercial operations in the second quarter of 2023.

Dioriga Gas, a unit of Greek refiner Motor Oil, aims to start construction of an FSRU facility off Agioi Theodori, near Athens, in the fourth quarter of the year.

It will have a storage capacity of up to 210,000 cubic metres of gas which will be either regasified and exported through Greece’s gas grid or sold as LNG via vessels and trucks.

Elpedison, a joint venture by Italy’s Edison and Helleniq Energy, wants to build an FSRU off the northern city of Thessaloniki, Greece’s second-largest, by 2025.

It will have the capacity to store 170,000 cubic metres of gas and deliver up to 20 million cubic metres daily.