Greeks in Canada Mark the Smyrna Catastrophe with Podcast Series

To commemorate the anniversary of the Smyrna Catastrophe exactly a hundred years ago, the Hellenic Heritage Foundation (HHF) has produced its latest historical podcast series Exodus: The Stories of 1922.

In the days, weeks, and months that followed the Great Fire of Smyrna, between 1.5 to 2 million people became refugees with Christians fleeing their homelands in the Ottoman Empire and Muslims fleeing Greece.

Though the Treaty of Lausanne formalized the population exchange the following year, the Great Fire of Smyrna set in motion events that still resonate today.

To commemorate this anniversary, the HHF’s award-winning History Committee produced a five-part podcast exploring the Great Catastrophe, as Greeks call it, referring to the mass expulsion of Greeks from Anatolia. 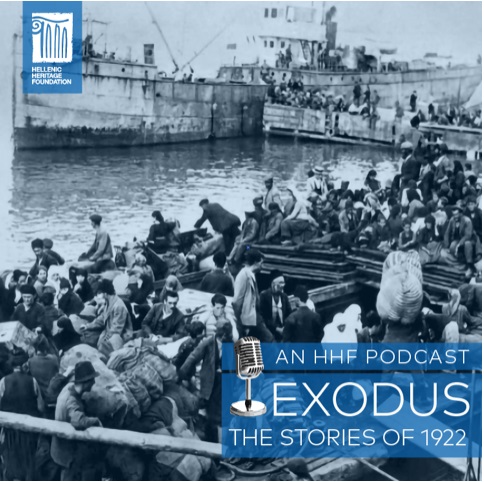 Podcast series on the Smyrna catastrophe

The five episodes cover the multicultural nature of the population in the late Ottoman period, how the forces of nationalism tore apart their society, and the wars which led to a mass exodus of Christians and Muslims away from their homelands.

Exodus also examines the plight of the refugees and the hardships of resettlement, but it will also look at their culture and resilience, as well as their ability to transform Greece.

“For many of us in the Greek diaspora, this story is personal because of our ancestral roots in Asia Minor and Thrace,” says Ms. Gionas.

“This podcast isn’t only for diaspora Greeks, but also for those interested in current affairs and concerned about refugee crisis created by modern-day wars in Ukraine and Syria,” Ms. Gionas added.

Podcast episodes can be downloaded on Spotify, Stitcher, and Apple Podcasts, or listened to on our website, www.hhf.ca.

In 2018, the HHF’s History Committee launched the year-long commemoration of the 1918 Anti-Greek Riots in Toronto. That campaign won the Heritage Toronto 2019 Community Heritage Award.

The HHF Presents has also produced the podcasts “The Idea of Greece on the Greek Revolution and Kore 670: The Podcast” on the Kore visiting exhibit at the Royal Ontario Museum this year.

The Hellenic Heritage Foundation is a charitable organization committed to the preservation, promotion, and advancement of Hellenic education, culture, and heritage in Canada.