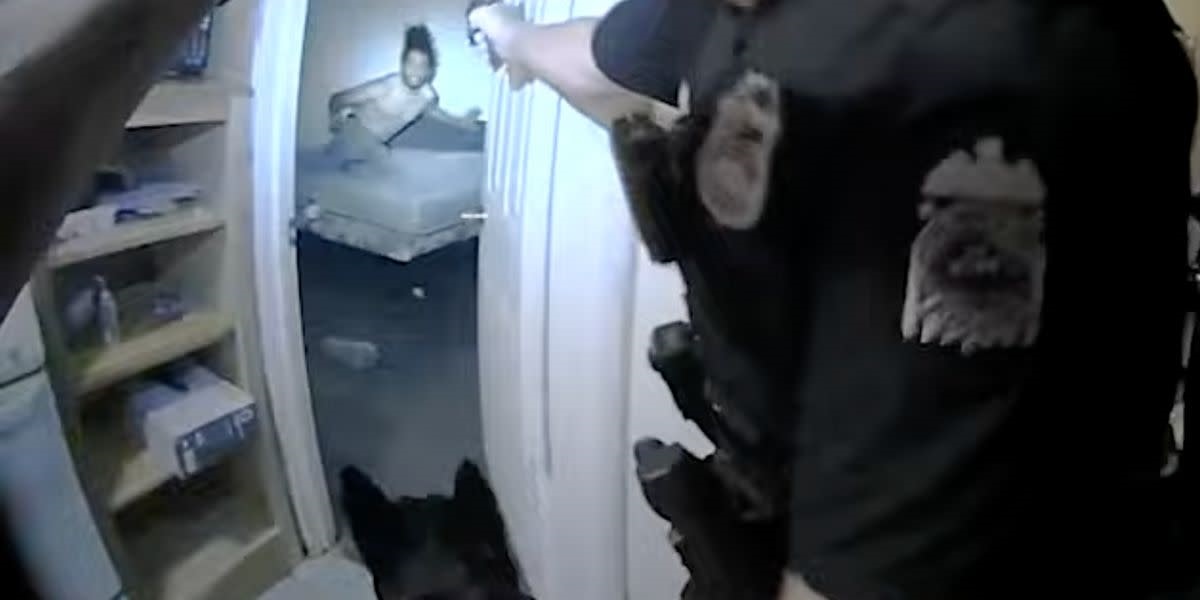 An unarmed black man was tragically shot in bed by a police officer in Columbus, Ohio, according to body camera footage that was made public by police.

According to a police statement, Donovan Lewis, 20, passed away on Tuesday as a result of being shot by Ricky Anderson, a thirty-year veteran police officer of the Columbus Division of Police assigned to the K9 squad.

Rex Elliott, an attorney for Lewis’ family, stated at a news conference on Thursday morning that the officer’s shooting was not justified.

Along with Lewis’ grandparents, aunt, uncle, parents, siblings, and other family members, Elliott said, “Donovan was unarmed, and he was abiding by police commands to come out of his room when he was shot in cold blood by Officer Anderson. They were just a few of the many people that have had their lives altered forever because of the events of early Tuesday morning.”

Anderson is on leave and the incident is being investigated by the Ohio Bureau of Criminal Investigation, Columbus Police Chief Elaine Bryant announced at a news conference on Tuesday.

The lawsuit comes after a string of tragic, contentious police confrontations with Black people that have spurred worldwide demonstrations, including in Columbus, where several law enforcement killings have occurred since 2020. It has been agreed that the city’s Division of Police would be reviewed by the US Department of Justice.

Lewis Was Shot at Around 2 a.m. on Tuesday

Around 2 a.m. on Tuesday, Lewis was shot at an apartment complex where uniformed officers were executing a felony warrant for domestic abuse and assault as well as unlawful handling of a firearm, according to Bryant. The individual who was shot and later identified as Lewis was mentioned in a police news release as the subject of the felony warrant.

Bryant said, “The officers knocked on the door for several minutes acknowledging themselves as Columbus Police officers.”

They can be seen knocking and shouting out to residents for over eight minutes in police body camera footage. They repeatedly call out “Donovan.”

Finally, a man came to the door and was apprehended by police, according to Bryant. Officers removed a knife from his pocket after he admitted to dozing off. About a minute later, a second male who was in the flat was taken into custody.

Bryant claimed that officers inquired about the presence of other people inside the apartment but were unable to confirm this. Columbus Police sent in Anderson and a K9 to check for further occupants.

On camera, Anderson can be seen holstering his gun before redrawing it as police approach the flat and before opening the bedroom door. “Hands!” is shouted by another cop as Lewis sits up in bed and is illuminated by the gun light of the other officer.

Lewis Is Shot In The Abdomen

In less than a second, the video shows Anderson reaching into the doorway and shooting Lewis in the abdomen as he lies face down on the bed. Lewis appeared to have raised his head from resting on his left side on the bed and was leaning on his left arm at the time.

For several seconds, an officer repeatedly shouts “Hands!” before asking Lewis twice to “crawl out here.” Lewis, however, is still lying in bed and is injured.

A cop finally announces, “I’m going in, cover me,” after more than twenty seconds have passed. Lewis is repeatedly instructed to place his hands behind his back by two officers when they enter the room. Officer says, “I need cuffs. I’m out of cuffs.”

Lewis lets out an audible groan as the cop starts to handcuff him. Picking up his right arm and folding it back, the officer says, “Put your hands behind your back, now.”

Shortly after this, a policeman orders Lewis to stop resisting.

Lewis was later brought by police from the flat to the grassy area in front of the building, where they treated him for close to five minutes before paramedics arrived. After being transported, Lewis passed away at OhioHealth Grant Medical Center, according to the Columbus Police statement.

Attorney Elliott, the family’s lawyer, referred to Lewis’ death as “utterly senseless,” saying that “excessive deadly force was recklessly used by Officer Anderson when he shot and killed an unarmed Black man.”

Following the tragic shooting, the Columbus Urban League is organizing a public meeting for this coming Saturday even as warrants were being served for Lewis’ arrest on felony and other counts.

Elliott stated that Lewis’ family has valued the community’s assistance thus far and has requested that any meetings or demonstrations continue to be “peaceful, supportive, and constructive.”