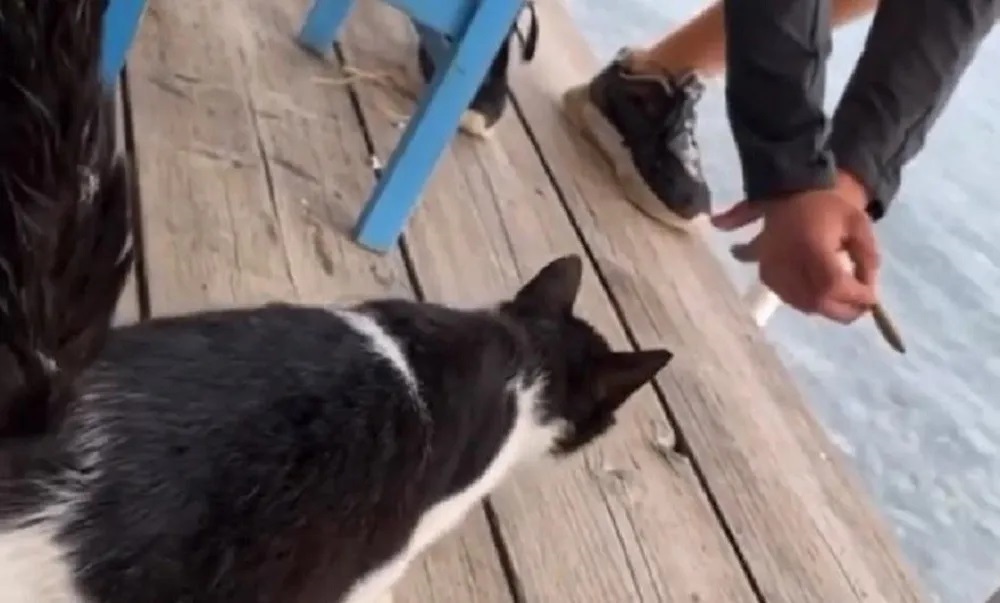 On Monday, police in Greece arrested a man who lured a cat near his table at a taverna and then kicked her into the sea in a shocking case of animal abuse.

The incident took place in a tavern of Aidipsos on the island of Evia on May 1st. It was caught on camera and was widely circulated on social media before police intervened to make the arrest.

The outrageous video shows at least two cats approaching the table. The perpetrator lures one of them with a fish and then kicks it. His friends are heard laughing as he tries to do the same with the second cat.

Reports say that the cat survived the abuse. A member of the local animal welfare society rushed to investigate the issue and told the animal welfare website zoosos.gr. the tavern owner had said the two cats belonged to him, assuring that both were fine and that he would help to find the abuser.

The abuser’s arrest was announced by Citizens Protection Minister Takis Theodorikakos, who said in a Facebook post that “violence against animals is unacceptable.”

“The government has passed a strict law to protect animals from abuse which is now in place, but in any case, it is a matter of humanity and culture,” said Theodorikakos. “I am deeply saddened by those who mistreat animals and those who tolerate it. I heartily congratulate those who raised the issue. The case now rests with Greek justice.”

Caution: The following video contains scenes that may upset viewers

As the wave of outrage spread, the perpetrator, a young man, uploaded videos on social media slamming his critics claiming it was just a “joke.” He claimed that the cat fell “20 cm down on the pebbles.” He further claimed that he is an animal lover who takes care of dozens of stray cats and dogs.

Greece has toughened the law on animal abuse which is now punished as a felony rather than a misdemeanor.

PM Kyriakos Mitsotakis said the new law will create rules so that no animal “will be abandoned or abused.”

“Greece is changing and is finally adopting a modern legal framework for the protection of pets,” Mitsotakis tweeted before the vote in Parliament in 2021.

Major provisions of the pet law in Greece

The new law stipulates that pet abuse will carry stricter fines and will now include acts such as abandonment, shooting, intentional injury, and poisoning.

In order to encourage owners to take better care of their pets, the bill introduces incentives by municipalities, such as a reduction in city taxes by up to 10 percent.