Russia Claims Attack on Children’s Hospital Was Staged by Ukraine

Russia claimed on Thursday that the airstrike on a children’s hospital in Ukraine’s Mariupol the previous day was staged by Ukrainians themselves.

The Russian embassy to the UK claimed a photograph of a pregnant woman injured during the Mariupol maternity hospital attack is fake and Russia’s Foreign Minister Sergei Lavrov branded the attack a “pathetic outcry” during failed peace talks in Turkey.

When asked about the airstrike during the press conference after the talks, Putin’s confidant replied: “It is not the first time we see pathetic outcries concerning the so-called atrocities perpetrated by the Russian military.”

He went on to claim that the hospital had been taken over by the Azov battalion — a group described by Russia as Nazis fighting alongside the Ukrainian army — and prior to the attack all the “mothers and nurses were chased out” of the hospital.

But Ukrainian officials said on Thursday that three people died in the attack, including a girl aged six, with at least 17 people injured.

Many of the pregnant women present at the hospital survived because they were hiding in the basement at the time of the strike, on the orders of hospital authorities, it is reported.

A terrifying photo from Mariupol,Ukraine. A pregnant woman is being evacuated after the Russian airstrike at the maternity hospital. pic.twitter.com/qTJqmETYyw

The Russian Embassy in London tweeted that a pregnant woman pictured on a stretcher as she is helped away by rescuers was simply acting. The Embassy claimed that the woman is beauty blogger named Marianna Podgurskaya.

“She actually played roles of both pregnant women on the photos. And first photos were actually taken by famous propagandist photographer Evgeniy Maloletka, rather than rescuers and witnesses as one would expect,” the Russian Embassy claimed.

Downing Street said the tweet from the Russian embassy claiming the maternity hospital bombed in Ukraine was no longer operational and that images had been faked was “disinformation”. 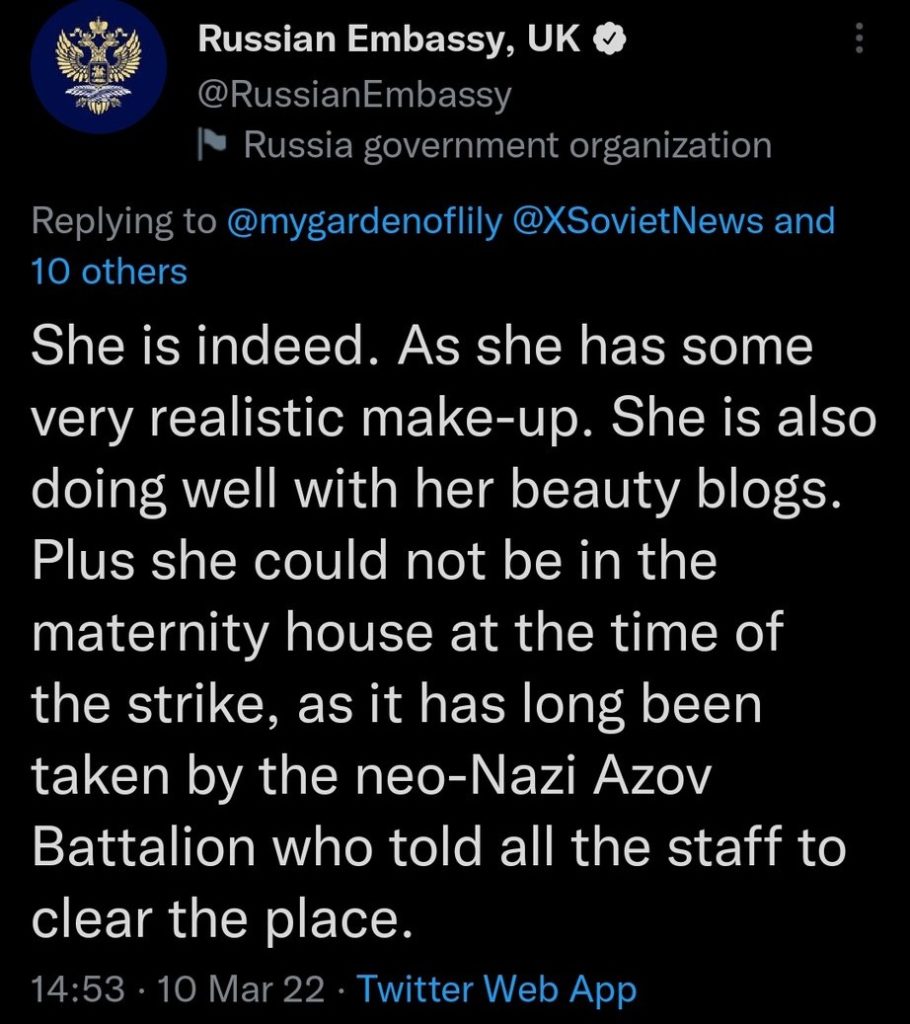 NEW: Twitter has removed content from Russian Embassy UK claiming the bombing of a maternity hospital had been staged pic.twitter.com/dV3TvduDj4

When asked about the Twitter account, a spokesman for the Prime Minister told reporters: “It is clear that this is further disinformation.

“You have seen the pictures of the people who were wounded during that attack, and you have seen what the Prime Minister said in his tweet yesterday.”

President Zelensky tweeted footage from the incident — which he described as a “direct strike” — showing destroyed rooms along a corridor in the building.

“People, children are under the wreckage. Atrocity! How much longer will the world be an accomplice ignoring terror?” the Ukrainian president asks.

Mariupol. Direct strike of Russian troops at the maternity hospital. People, children are under the wreckage. Atrocity! How much longer will the world be an accomplice ignoring terror? Close the sky right now! Stop the killings! You have power but you seem to be losing humanity. pic.twitter.com/FoaNdbKH5k