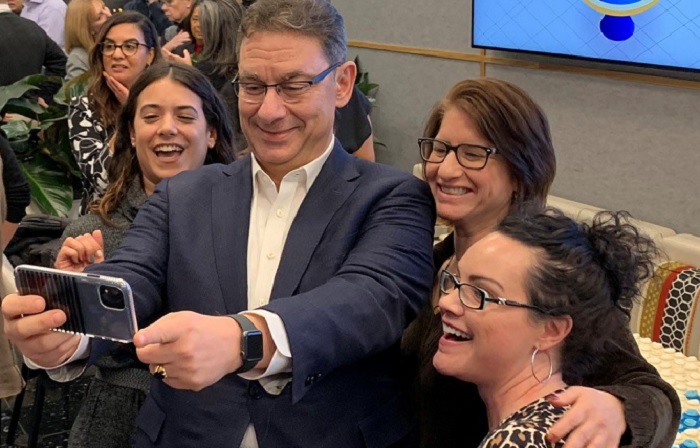 CNN Business has named Pfizer CEO Albert Bourla, a Thessaloniki native who left Greece at the age of 34 to pursue a career in the pharmaceuticals industry, as the CEO of the year.

CNN says that Bourla was their choice for all that Pfizer has done in a year where Covid vaccines went mainstream (vaccine was even named word of the year by Merriam-Webster) and helped stabilize America’s economy — and the world’s for that matter.

“Pfizer did a lot of good [for] humanity and we are very, very proud of it,” Bourla said in an interview with CNN Business. “Not only were we able to save so many lives … but we are enjoying high levels of corporate reputation right now. People like us.”

CNN notes that Pfizer isn’t the only company that has developed a vaccine. But the Big Pharma leader, even more so than its European partner BioNTech or rival vaccine developer Moderna, has become synonymous with the fight against Covid, it adds.

In addition, Pfizer has developed a pill that could drastically reduce the risk of severe complications, hospitalization and death for people who contract the virus. The Food and Drug Administration announced last week it had approved Pfizer’s Paxlovid oral treatment.

Bourla a descendant of the Jewish community moves to Pfizer

Born in the northern Greece city on October 21, 1961, he is part of the long history of the Sephardic Jews of Thessaloniki.

The Bourla family arrived in Thessaloniki from Spain about six centuries ago. As jewelers, they created and sold diamonds, jewelry and watches throughout the Balkans, and built two important buildings in the city, one of which is the Moroccan Mansion.

Albert Bourla is a descendant of the few survivors of the Jewish community of the city which was almost completely wiped out by the Nazis during World War II.

After graduating from high school, the Pfizer CEO went on to study at the Aristotle University of Thessaloniki. He graduated with a PhD in veterinary medicine and worked as a veterinarian for a time.

He joined Pfizer in 1993, first serving as a doctor of veterinary medicine and technical director for the company’s animal health division in Greece.

At the age of 34, he left Thessaloniki with his wife to join Pfizer Europe and work in several positions, coming to live in four different countries.