Patriarch Bartholomew to Open Saint Nicholas, the “Parthenon of Orthodoxy” 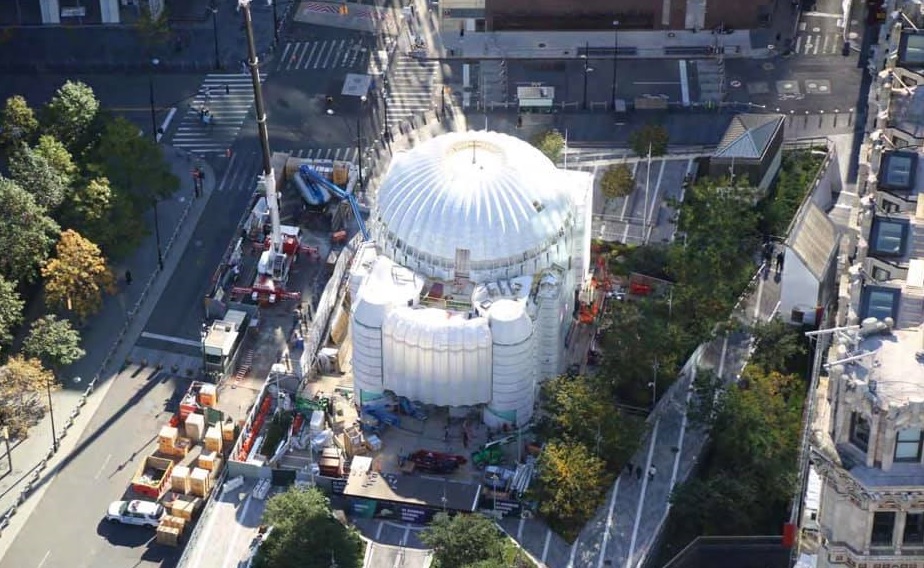 Patriarch Bartholomew, who is visiting the US, will preside at a blessing and cross elevation ceremony at Saint Nicholas Shrine on Tuesday, the tiny Greek Orthodox Church that was destroyed on 9/11 and completely rebuilt.

Saint Nicholas, the National Shrine at the World Trade Center, is now almost ready. Named after the patron saint of sailors, the church was the first stopping off point for many Greek immigrants after they left Ellis Island. As skyscrapers went up around it, the modest church added one floor to the whitewashed structure that sat, for years, in the shadow of the Twin Towers. The building was reduced to ruins when the south tower collapsed on Sept. 11, 2001.

On Tuesday a new era begins as Patriarch Bartholomew will bless the cross which will be placed on top of the translucent marble dome.

“It’s been a dream, it’s something that we as a community can be very proud of, this will be the most visited Orthodox Church in the world,” Rev. Alexander Karloutsos, Vicar General of the Greek Orthodox Archdiocese of America said.

He tells Greek Reporter that the World Trade Center is expected to be visited by between 8 to 10 million visitors each year. “We are hoping that at least half of them will be coming (to the church)” he adds.

Karloutsos is among the most prominent religious figures in the United States. He is a liason, advisor and counselor to some of our nation’s highest-ranking decision-makers. Since he is also a central figure in the efforts to rebuild the Greek Orthodox Church, he cannot hide his excitement about Tuesday’s event.

He tells Greek Reporter that Patriarch Bartholomew will preside over the opening of the Shrine in the morning by conducting the traditional Thyranoixia service, and will officially open its doors after nearly twenty years of planning and construction.

He adds that the event, which will be covered by national and international media, is being organized by the best event planners, including Greek-American George Gigicos, who was instrumental in helping Donald Trump win the 2016 Presidential election.

Saint Nicholas: “the Parthenon of Orthodoxy”

The Saint Nicholas Shrine is covered in the very same Pentelic marble as the Parthenon, atop the Acropolis in Athens.

The radiant, cream-colored light of the marble of the Parthenon, which has shone like a beacon for more than two millennia, is now part of the new Shrine, which has been designed to serve as a lantern, with a transparent dome which will allow the light from within to shine up into the skies above New York City.

“You will see this beautiful, lovely jewel of a church shining in the night. It will be like a beautiful bride amongst the barbarian buildings.”

On September 11, 2021, Saint Nicholas was illuminated for the first time, on the on the twentieth anniversary of the terrorist attacks. A brief memorial service by Archbishop Elpidophoros was held and the exterior of the building was lit up for the first time.

Fr. Karloutsos remembers the sad months and years following the 9/11 attack, when Archbishop Demetrios asked him to set up meetings with the governor of New York to discuss the rebuilding of Saint Nicholas.

“We waited about seven, eight years to start serious discussions because everything was destroyed down there.” He says that initially the Port Authority wanted the church to be rebuilt at 155 Cedar Street.

“We sat down with, at that time, the Attorney General Andrew Cuomo. He said ‘what would you like as a Greek community?’ And I said to him, when he was still running for governor, ‘if you become governor, we’d like for you to give us 130 Liberty Street back, and to support it totally and unequivocally,’ Which he did,” Karloutsos tells Greek Reporter.

Then, he continues, catastrophe struck — as a seriousfinancial scandal hit the project. Money had been used from the fund that no one knew about.

In June 2019, the U.S. Attorney’s Office had announced that George Papadakos, the Archdiocese’s former Director of Finance, had pled guilty to embezzling more than $60,000 of Archdiocesan funds for personal expenses.

In November 2019, the former executive director of the Greek Orthodox Archdiocese in America, Jerome Dimitriou, was arrested on charges he embezzled more than $500,000 from the church.

“A tribute to Hagia Sofia and to our Hellenic heritage”

But through it all, Karloutsos did not give up. The arrival of the new Archbishop Elpidophoros and the founding of the Friends of St Nicholas, an organization overseeing the reconstruction of the church, breathed new life into the project and into the fundraising effort.

As Patriarch Bartholomew prepares to officially open Saint Nicholas, Karloutsos feels proud of the achievement of Greek-American community as a whole.

“This church will be a light on a hill, and the light will be that of Orthodoxy and Hellenism. Hellenism continues to thrive here in America. You see all of the magnificent buildings in the US that have the Hellenic flair, but nothing will be like the shrine of the Greek Orthodox Church at Ground Zero.

“That is really going to shine, and it will be a tribute to Hagia Sofia and to our Hellenic heritage, he told Greek Reporter, adding “that’s why we wanted Pentelic marble from the beginning.”

Related: “St. Nicholas Will Be the Most Visited Church in USA” Leaving Turbulent Past Behind: Michael Psaros