“King Otto” Rehhagel celebrates Greece’s Euro 2004 football triumph, representing perhaps the greatest upset in all of sports history. Along with a string of other seminal dates in the long history of this ancient nation, 2004 will go down as another point in time that all Greeks who were living at the time will never forget.

A date that, when a Greek person even hears it in passing, brings them back to the almost impossible victory that they witnessed that fateful day. That most unlikely football win, against the highest of all odds, was a triumph of the modern Greek spirit.

Also produced by Cinema Nolita, the film is distributed worldwide by the firm Piece of Magic, and is currently showing at cinemas in Australia.

Marks, who has worked at HBO and ESPN Films, plans for “King Otto” to be shown in Greece to coincide with the 2021 Bicentennial celebrations.

King Otto a film about the underdog

Marks was asked in a recent interview with Greek Reporter what it was exactly that prompted him to create the documentary and what, in his opinion, this enormous comeback victory meant for the Greek people.

“Apart from being Greek and wanting to champion Greek stories, I wanted to make this film because I love the theme of the underdog and enjoy stories of outsiders who defy seemingly insurmountable odds to upset the establishment,” he replies.

“When we began this project a few years back, Greece was inundated with criticism from the global press and very much felt like an outsider in Europe. I wanted to tell this story to remind people of a better time, when Greece was at the center of the world.

“The summer of 2004 was widely considered by many Greeks to be the peak before the subsequent crash, so it was an opportunity to look to the past for inspiration, something we do often in Greece,” Marks explains.

The odds against Greece winning that day were astronomical, with some oddsmakers giving them officially as 80-1. The team had never even won one tournament match before that fateful day of July 4, 2004.

Greek Reporter asked Marks, in his opinion, exactly what it was that made the stars align for the country in the Euro 2004 win?

“Some have the odds at 300-1 even, so I think a lot of things needed to go right, but Rehhagel’s inspiration and ultimately the Greek spirit pulled them through in the end,” the director states. 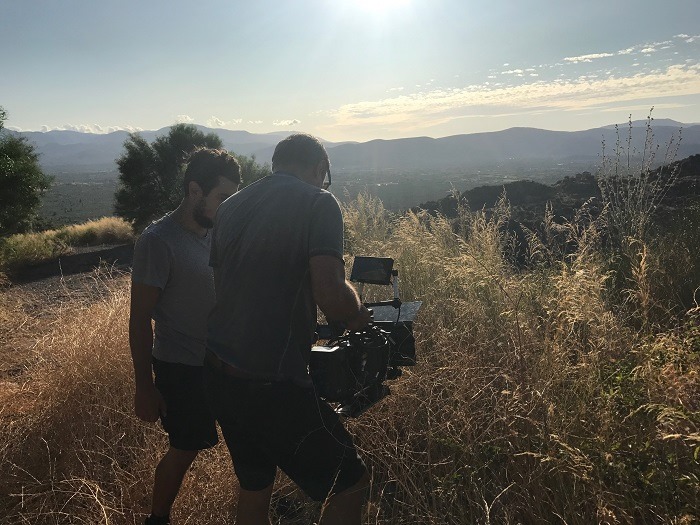 “There is a lot more that went into it and we tried to explore those elements in the film so that people can see for themselves just how much had to go right for the stars to align in 2004.”

Greek Reporter also asked Marks what, in his opinion, occurred just two years later, when Greece failed to qualify for the World Cup, and what he thought of their performance since that time.

“2004 was a special time for the National Team and what happened two years later, I feel should be looked at separately,” the film director explains. “The team qualified for the 2008 Euro, the 2010 World Cup and got to the round of 16 in the 2014 World Cup, so I don’t think it was as much of a one-off as people try to position it.”

Additionally, he states, “Prior to 2004, the Greek team had qualified for only two major tournaments in their history and had never even scored a goal in any of those matches, so the trend of winning Euro 2004 and subsequently expecting high profile qualifications was a shift in the right direction.”

“I think the word that kept coming up for the team and Rehhagel was ‘respect.’ The players respected him and he showed respect to the players in return. He wasn’t influenced by anything other than his own judgment and the players seemed to trust and respect that approach,” Marks replies.

Musing on the type of game it was — known for its strong defense — Marks says “they were criticized heavily for their defensive style of play by the international football community, but that doesn’t really paint the full picture.

“They actually adjusted their strategy based on who their opponent was, and while they generally played a defensive brand of football in the knockout stages of the tournament, they scored twice against Portugal in their opening match and finished atop their group in qualification.”

Marks adds that “The achievement was obviously rare for a team like Greece, but many relatively small teams copied the same tactical approach to pull off their own miracle upsets, i.e., Leicester City in 2016. Ultimately, all that matters is who wins in the end and the Greeks were certainly not the only team to ever employ a defensive approach.”

Upon the completion of the film, “King Otto” producer Shani Hinton told interviewers from Variety that “Chris is an exciting new director to be working with and has brought this wonderful, warm story of Greek glory to life at a time when we need such uplifting tales.
“Otto and the Greek team created a bond that has carried on to this day and it is this mutual love and respect that shines through Chris’ film.”