How Was Cancer Treated in Ancient Greece?

Even though the first case of cancer was recorded in Egypt in 1600 BC, it was Hippocrates (410-360 BC), the father of medicine, who identified and gave the name “cancer” to the illness that blights humanity to this day.

Hippocrates described several kinds of cancer, calling them “karkinos”, the Greek word for crab, or karkinoma (carcinoma). The word came from the appearance of the cut surface of a solid malignant tumour, with the veins stretched on all sides as crab’s feet.

Hippocrates’ conception of cancer was the humoral theory, as he believed that the body contained four humors (body fluids) — namely blood, phlegm, yellow bile and black bile. Any imbalance of these fluids would result in disease and excess of black bile in a particular organ site was thought to cause cancer.

he humoral theory of cancer was standard through the Middle Ages for over 1300 years. During that period autopsies were prohibited for religious reasons, thus limiting knowledge about cancer. Humoral theory-based treatment remained popular until the 19th century, when cells were discovered.

Hippocrates made drawings of visible tumors

Since ancient Greek tradition prohibited opening the body, Hippocrates only described and made drawings of visible tumors on the skin, nose, and breasts. Treatment was based on the humoral theory. According to the patient’s humor, treatment consisted of diet, blood-letting and/or laxatives.

Hippocrates believed that cancer was the result of an excess in black bile in any possible part of the body. If the spleen failed to clear out this bile, the patient would develop some kind of cancer. He had also described as early symptoms of cancer a bitter taste in the mouth that would be accompanied by a loss of appetite. 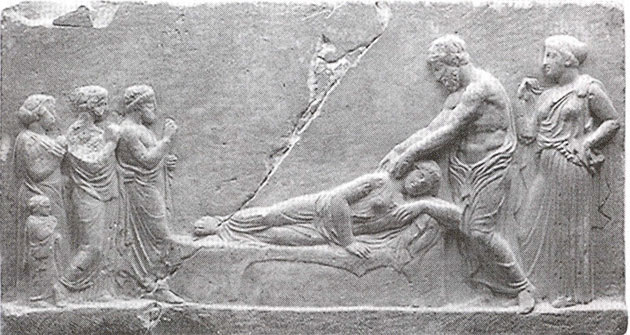 The physicians of the time described different cancer types, including the hidden and obvious ones, the acquired and non-acquired type, as well as the tumor sizes differing from as small as an eyeball to as big as a melon.

The ancient Greeks had even noticed the presence of vascular dilatation in cases of cancer.

According to Galen, the most common types of cancer were the uterus and breast cancer found in women.

When examining the patient, ancient Greek physicians noticed that the cancer tumor was palpable and somewhat hard to the touch, irregular in shape, adherent to the surrounding tissue with dilatation of the veins, rather cool in temperature and sometimes sores would build up in the surrounding area of the body.

It also caused swelling and was not accompanied by fever. Another characteristic symptom of cancer was recorded to be acute pain and bleeding.

Regarding treatment, ancient Greek doctors gave the patient medical solutions, and if they failed to help the patient, then they proceeded to remove the tumor with surgery. They used herbs such as asclepia, lichen, aristolochia, dragonvosis, erythematosus, erybuminus, ellevaros, raisinus and others.

In order to remove the malignant black bile they performed phlebotomy. If that did not suffice, they removed the tumor through surgery, if possible, and proceeded with  cauterization of the surrounding vessels to stop excessive and dangerous hemorrhage.

After surgery, the patient had to follow a particular health-boosting diet and exercise program to feel better. However, the vast number of herbs and medicines used indicates that ancient doctors already knew how low the chances were for a cancer patient to survive the illness.

Cancer-Curing Miracle Water: The Scam that Fooled Thousands of Greeks