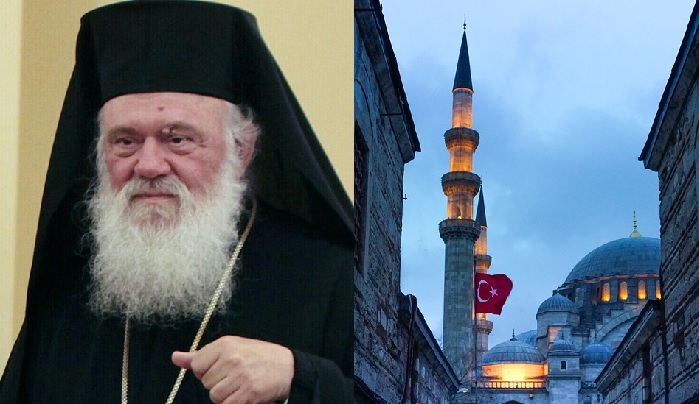 Turkey slammed Archbishop of Athens and All Greece, Ieronymos, for his remarks during a television interview on Sunday about Islam.

“These provocative expressions of Archbishop Ieronimos, which incite the society to hostility and violence against Islam, also show the frightening level Islamophobia has reached,” reads a statement by the Turkish Foreign Ministry.

“Such malign ideas are also responsible for the increase of racism, Islamophobia and xenophobia in Europe,” it adds.

Ankara was responding to Ieronymos’ interview on Open TV, in which he appeared to claim that Islam is not a religion, but a political party seeking war.

“Islam, its people, is not a religion but a political party and are the people of war…They are the people who seek expansion, that is the characteristic of Islam,” Ieronymos said.

The Archdiocese of Athens issued a statement saying that the quote was misinterpreted.

Ieronymos was “referring to the group of extreme fundamentalists, who sow terror and death throughout the Universe,” the statement said and added:

“These are exactly the people the Archbishop was referring to, people who are instrumentalizing Islam and turning it into a deadly weapon against all those who have a different view.”

The statement underlines that the Archbishop and all the metropolitans of the Church of Greece “respect all the known religions and treat all their faithful with Christian love and solidarity.”

Its head, Ali Erbas, said in a statement that “this kind of discourse aiming to marginalize Muslims feeds the racist perspective against them, and leads to attacks on their lives and places of worship.”

He said that the archbishop’s statements provoked the society, and could lead to rise in hatred, hostility and violence against Islam.

Erbas said Islam is a religion of peace, and the Islamic civilization has always enabled people to live together for centuries, irrespective of their beliefs, religion and culture.

“It can only serve to increase misunderstandings amongst people about Islam,” the statement reads.

“As a religious leader to millions of Greeks around the globe, these comments are not only irresponsible but may increase the hatred or reservations that some Greeks already hold towards Islam and Muslims.

“The Archbishop’s statement gives an entirely false impression about Islam and the Founder of Islam, Muhammad,” the statement adds, quoting Atta-Ul Naseer, National President of the Ahmadiyya Muslim Community.

The controversy over Ieronymos’ remarks comes just one week before the start of exploratory talks between Greece and Turkey.

Last week, Greece’s Foreign Ministry announced that the new, 61st round of exploratory talks between Athens and Ankara over territorial claims in the Mediterranean Sea will start on January 25 in Istanbul.

The Turkish Foreign Ministry sought to exploit the incident by claiming that such remarks are undermining the process.

“The fact that such a statement was made at a time when preliminary preparations are being made for exploratory talks is also meaningful and is an unfortunate step towards undermining the process,” the Foreign Ministry in Ankara said.