Pfizer Chairman and CEO Albert Bourla announced on Wednesday that the pharmaceutical giant is to establish a second hub in Thessaloniki, employing 350 people.
The announcement was made during a roundtable discussion at the 31st annual Greek Economic Summit (GES), organized by the American-Hellenic Chamber of Commerce.
The discussion featured Greek Prime Minister Kyriakos Mitsotakis, the Vice President of the US Chamber of Commerce Myron Brilliant and the CEOs of leading multinationals, including Andre Calantzopoulos, the CEO of Philip Morris International, and Punit Renjen, the Global CEO of Deloitte.


Bourla was described as the “man of the moment” by the President of the American-Hellenic Chamber, Nikolaos Bakatselos, who was moderating the discussion. This follows the UK’s decision earlier on Wednesday to become the first country world-wide to approve the Pfizer vaccine.
The Thessaloniki-born CEO referred to the work currently being done at the already functioning digital hub in his home town and said that “Despite the pandemic that delayed us, we will be having 200 people working there by the end of the year.”
Bourla added that Pfizer is “extremely satisfied” with the quality of talent assembled and revealed that between 15%-20% of the applicants were Greeks living abroad.
“The success we had in Greece with the digital hub has encouraged us to make the decision to open a second hub in Thessaloniki for internal professional services — financial services, human resource services and call centers,” he announced. He stressed that the second hub will employ another 350 people.
“So, suddenly in a city like Thessaloniki we have a plan to employ 600 people with the possibility to double it in the future,” Bourla said.
“This is happening because we see the environment changing in Greece. You know, feel welcome to come and invest. I am so happy that my country is doing so well because I know how the global business environment thinks about Greece right now,” he added.
At the Summit roundtable which was held in partnership with the U.S. Chamber of Commerce and the Atlantic Council, Bourla also said that even if a small percentage of the population is vaccinated, “we can have a very large impact, because a very small percentage of the local population contributes disproportionally to the severe cases and deaths.”
“If we vaccinate this proportion of the population in the beginning we should be able — without developing herd immunity — to see a dramatic drop in the numbers infected,” he stated.
He also warned governments and health authorities of what may happen once the Covid-19 vaccine becomes available throughout the globe.
“The governments need to make sure that given the pressures to open the economy they should not make the mistake thinking that, because we now have the vaccine, we can immediately relax measures,” he stressed.
“I think it is important to use the vaccine as one tool in controlling this disease. The time to go back to normality is not far away, but it is not now,” he added.
Pandemic a catalyst for change 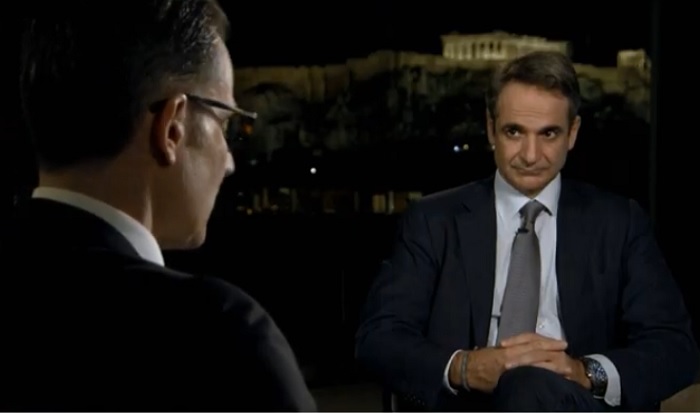 The coronavirus pandemic is a dramatic catalyst for change, Prime Minister Kyriakos Mitsotakis said during the roundtable discussion.
Mitsotakis stated that the government was aggressive in implementing reforms without losing time, and said that despite the second wave of the pandemic being tougher than the first, “Greece will be one of the winners after the pandemic.”
He stressed that one must not underestimate the productive dynamic of the country, and that will lead it to recovery, saying “We must protect jobs and liquidity, especially in small enterprises, and create favorable investment conditions in Greece.”
In the discussion he referred to companies which invested in Greece during the pandemic, and to incentives the government provides for them. “The pandemic has made us wiser, and while facing a difficult crisis we can see both our strong and weak points, but we are even more dedicated to our reforms agenda,” the Greek leader said.
“With the help of the Recovery Fund, we will not miss the opportunity to restructure the country and forge ahead,” the Premier added, saying “right now our commitment is to save lives every day, and this is the most important challenge now.”