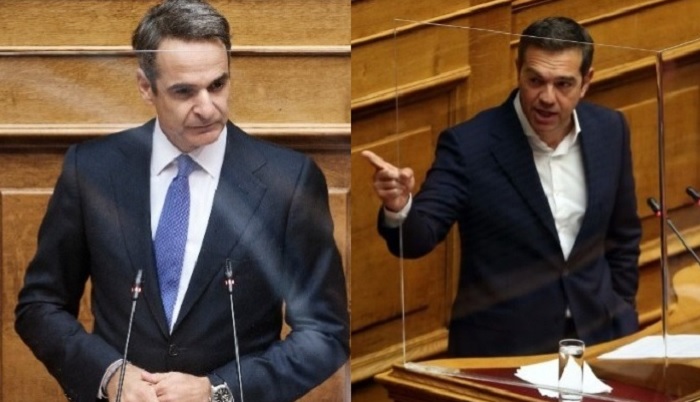 Greek PM Kyriakos Mitsotakis clashed with main opposition leader Alexis Tsipras in Parliament on Thursday over the government’s handling of the coronavirus pandemic.
Mitsotakis said that young adults hanging out in bars are primarily responsible for the transmission of the coronavirus in Greece.
“We tried many plans but they were betrayed by the behavior of some people,” he told lawmakers in Parliament opening a debate about the government measures to contain the virus.
“We know today what the sources of the outbreaks were. We are saying this to explain to society that these behaviors create a public health problem for everyone. The main source for the spread was the entertainment of young people.”
On his part, Tsipras accused the Prime Minister of shifting the blame to the citizens, instead of acknowledging his responsibilities.
“The country has 11 million individual responsibilities. Only one person has no individual responsibility, and that is Mr. Mitsotakis”, he said.
“You tried to gain politically from the health crisis and human suffering and you are coming here today to say that you have made almost no mistakes, that young people are to blame,” said the main opposition leader.
He noted that thousands of people are packed daily onto public transport like sardines while opening the bidding process to supply 750 new buses has been cancelled.
Thessaloniki lockdown came late
Mitsotakis admitted that tougher restrictions should have been taken a week ago in Thessaloniki to avoid the rampant spread of the virus.
“We could have imposed the use of face masks everywhere earlier, limit the evening entertainment earlier, take measures in Thessaloniki earlier,” he said.
He also defended the government’s decision to reopen to tourism in July without compulsory testing for all arrivals, arguing that if health authorities had conducted PCR tests on all arrivals Greece would have ended up with 10-20% of the tourism it actually had.
He insisted that the jump in infections “is not linked” with the opening of tourism this summer.