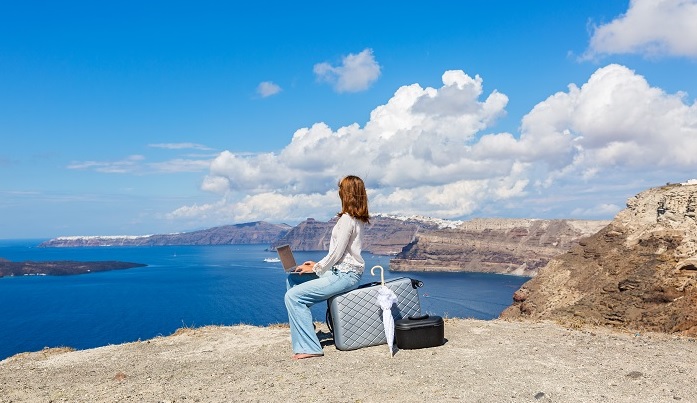 With an eye toward encouraging smart young Greeks who left the country for greener pastures during the economic crisis to return home, the Greek government has a new plan that would make the prospect hard to resist. But the plan is open to anyone, regardless of Greek citizenship, with a few caveats.
At the urging of Alex Patelis, an adviser to Greek Prime Minister Kyriakos Mitsotakis, a 50% tax break will soon be offered to those who the country needs at home to try to reverse the brain drain that has occurred in recent decades.
The measure is aimed at enticing back the young professionals who even now — even in coronavirus times — could move back to the country easily and work from home digitally.
In speaking to Reuters, Patelis said Greece must work to attract the “digital migrants” who are right now working remotely from home all over the world. His reasoning is that they could just as easily do that from their homeland.
“A worker from abroad who moves to Greece will be eligible for a 50% exemption on income earned here for seven years under the plan,” Patelis told interviewers on Wednesday, stating that there will be legislation written by the end of 2020 for this new venture.
The adviser stated that Greece needs to create jobs, and this can be accomplished not only through the large-scale relocation of a country to Greece but by many individuals who simply make the personal decision to return home — and that can be made much easier by the carrot of a 50% tax break after they make the move.
Returning Greeks and Foreigners Welcome as Digital Migrants
However, the decision needs to be made fairly quickly because the incentive deal will be effective for jobs that open in Greece beginning in 2021. But even those who have not been taxed residents of Greece within the last seven years will be eligible and the plan will be in effect for a total of seven years.
Patelis explained “The main criterion for eligibility for the tax incentive is tax residence.”
Naturally, the Greek government hopes to attract as many high-level executives and professionals as possible with the new plan, but all workers who can work from home digitally are of course welcome to take advantage of it.
Greece, like all Southern European countries which depend heavily on tourism, suffered mightily this year because of the coronavirus pandemic, with an estimated 9% decline in the economy as a result. As many as 40% of jobs in Greece may depend either directly or indirectly on tourism.
Unemployment, which has been the bane of the country ever since the economic crisis of the 2010s, is now at 18% — lower than during the worst days of the pandemic, which saw 30% of Greek people out of work, but still very worrying as it is one of the highest rates anywhere in Europe.
Estimates have pegged the number of young Greek people who left the country during the worst years of the economic crisis at 800,000 and the overall contraction in the economy has estimated to have been a punishing 25%.
“An extra push is needed to see them return,” Patelis explained to reporters. “The coronavirus pandemic has also shown,” he says, “that it is possible in many cases for one to choose where to live and work thanks to technology. We can have digital migrants.”
Brexit Bonus
Greece is also  attempting to take advantage of something called a “Brexit bonus” — hoping to lure away those who have gone to the green pastures of the United Kingdom and who may desire to live back in Greece and within the European Union once again.
“We just want to get a share of that pie,” Patelis explained.
Hope is on the horizon long-term, since Volkswagen decided to invest heavily in electric-vehicle manufacturing on the Greek island of Asypalaia, and Microsoft has pledged to create a new hub in the country as well. Pfizer is also creating a new digital hub in Thessaloniki which is on the verge of opening its doors now.
The all-important Moody’s Investors Service just last week upgraded Greece’s sovereign credit rating, citing high growth potential.
But new faces are always needed and the incentive will only be available for those who move into new positions created in 2021.
Currently, Greek taxes come to 44% for all earnings over 40,000 euros ($47,000). The country also already has an attractive flat tax rate for individuals who are thinking of moving to the country and who are qualified for that type of plan, and there is a reduced rate for pensioners who relocate to Greece from other countries.

Greece already has a program to attract wealthy investors through a flat tax rate for those who qualify and are willing to shift residence. The country also has a reduced rate for foreign pensioners.