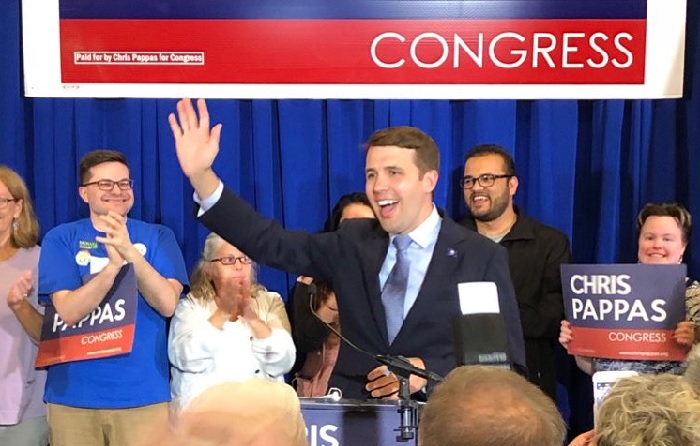 From the bottom of my heart—thank you, New Hampshire!

I just finished delivering some remarks about the important work ahead for the people of #NH01: https://t.co/Y7ttrK3M9V #NHPolitics https://t.co/nyQIkoNhv5

Pappas, a Manchester business owner and former state lawmaker and executive councilor, told supporters Tuesday night that he viewed his work in Congress as a form of public service.

“You know, public service has never been a political game to me — it’s always been about making people’s lives better,” Pappas said.

Born in 1980, Pappas has been serving as the U.S. Representative for New Hampshire’s 1st Congressional district since 2019. He previously served on the New Hampshire Executive Council from 2013 to 2019, representing the 4th district.

Pappas was born in Manchester, the son of Dawn and Arthur Pappas. His paternal great-grandfather emigrated from Greece.

Pappas graduated from Harvard College, where he wrote for the Harvard Crimson, in 2002. He has also served as a board member of Southern New Hampshire Services and the Manchester Historic Association. First elected to public office in 2002, Pappas served two terms in the New Hampshire House of Representatives.