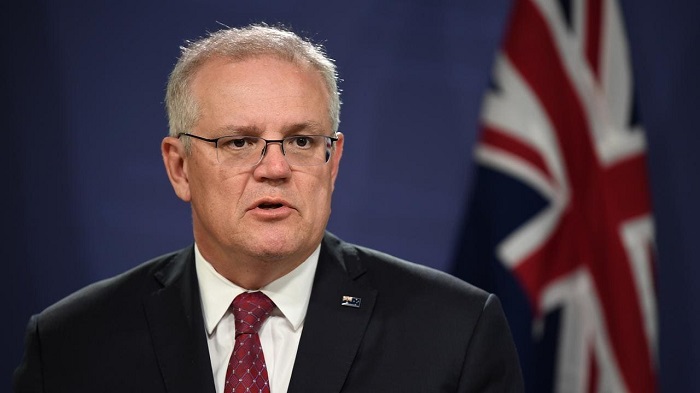 The Prime Minister of Australia Scott Morrison on Wednesday described OXI Day as “a beacon that lit our way to victory,” in a message honoring the determination and sacrifice of the Greeks in the Second World War.

“Eighty years ago, Greece  answered fascist Italy’s hostile advances with a resounding ‘όχι!’ (no). With that single word, Greece stood bravely against the rush of totalitarian triumph of the Second World War,” he said.

The full text of his message:

“On this day, we join with the people of Greece, and the Greek Australian community, to honour Oxi Day as a beacon that lit our way to victory.

“In acknowledging the courage of his people, General Ioannis Metaxas declared that Greece’s determination arose from, the eternal principles of morality, justice and liberty, established 3000 years ago on the sacred soil we are now defending.

“Those principals inspired Australian and New Zealand forces in their fight alongside Greek soldiers and civilians in 1941. They fought knowing that tyranny, if not confronted together, would eventually have to be confronted alone.

“Despite the courage of the men and women involved, the ill-fated campaign ended in defeat. But we have never forgotten the selflessness and courage of the Greek people in the face a long night of brutal tyranny. An imperishable bond of friendship was forged in defence of liberty.

“Eventually tyranny was vanquished and this year we celebrate 75 years since the end of the Second World War.

“Devotion to freedom and self-determination inspires the steadfast resistance of free people to tyranny in all its forms. It is the foundation of Australia’s sovereignty and commitment to the ideals of a liberal democracy.

“We share those values with the generations of Greek Australians who give so much to shape our national story. As the most successful multicultural nation on earth, migrant communities enrich and invigorate our social cohesion.

“This year the commemoration of Oxi Day will be different – here in Australia, in Greece and around the world. The unprecedented challenge of the COVID-19 pandemic has changed the ways in which we gather and celebrate. But the spirit of our commemoration remains the same.

“On 28 October, I will join in reflecting on that day 80 years ago with respect and admiration – for the tragic losses of war, and for the bright future born of that time.