By Stavros Anastasiou
July 19, 2020
Facebook
Twitter
WhatsApp
Linkedin
Email
Professional tennis player Stefanos Tsitsipas, decided to vacation at the island of Mykonos after having undergone intense training with the Mouratoglou Tennis Academy.
According to reports, Tsitsipas rented a large villa for both him and his friends, complete with an outdoor pool and grand view of the shoreline, to enjoy their stay on the island.

The famous tennis player had been training all summer, after having reached the finals at the Ultimate Tennis Showdown. During his time off the tennis course, Stefanos Tsitsipas took to Twitter to share his enjoyment, saying that “I think I’m in love with Greece.”
Tsitsipas also didn’t fail to show fans just how much life and beauty the island paradise holds, posting videos and pictures of Mykonos and promoting it on his social media.

The young athlete spent his time swimming in the islands’s many lush beaches, catching the beautiful sites, and even having a conversation with mayor Konstantinos Koukas.
Being notoriously passionate about recording creative videos, one of the tennis player’s works in Mykonos included him hitting a ball while jumping into the pool at his villa. 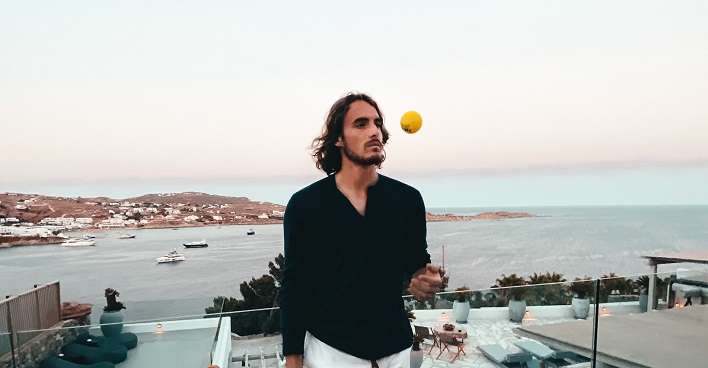 Stefanos Tsitsipas is currently the youngest tennis player ranked in the Top 10 by the Association of Tennis Professionals, while also having a career-high ranking of No. 5 in the world, making him the highest-ranked Greek tennis player in history.