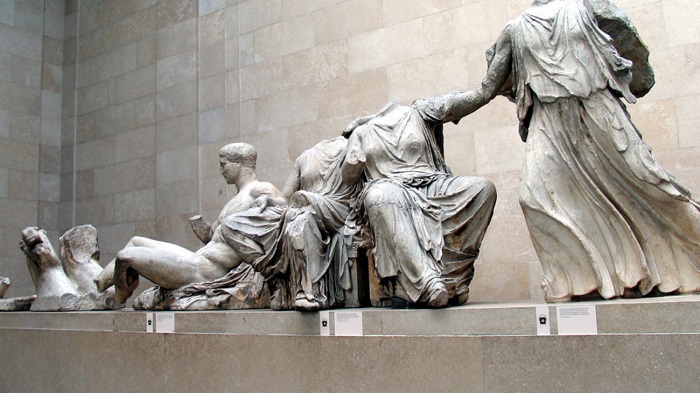 The Greek government has once again called on Britain to return the Parthenon Sculptures as the Acropolis Museum marks its 11th anniversary, The Guardian reports.
Greece’s Culture Minister Lina Mendoni told newspaper Ta Nea that Greek authorities will never give up the claim for the return of the cultural goods to their place of origin.
Greece’s efforts for the return of the precious marbles have started in the mid-1980s by then Minister of Culture Melina Mercouri. However, the British Museum continues to refuse to return them.
The marble sculptures were originally part of the temple of the Parthenon but were removed by British diplomat Lord Elgin in the early 19th century and are now on display in the British Museum in London.
The remaining sculptures have been removed for protection and are exhibited in the new Acropolis Museum that now celebrates its 11th year. This is where the sculptures will be displayed when they are retrieved.
The Greek government has promised to strengthen its campaign to retrieve the artwork in time for the country’s 200-year independence celebrations next year.
The British Museum continues to claim rightful ownership, as Britain has long argued that Elgin was given permission to take them by local Ottoman rulers. It also claims that Greece has no proper place to display them.
“Since September 2003 when construction work for the Acropolis Museum began, Greece has systematically demanded the return of the sculptures on display in the British Museum because they are the product of theft,” Mendoni said.
Repeated opinion polls show that the majority of Britons are in favor of the return of the sculptures to their home country.
“It is sad that one of the world’s largest and most important museums is still governed by outdated, colonialist views,” Mendoni said.
Another related story: After Britain’s exit from the European Union, new efforts are made for the return of the marbles to their “home”.