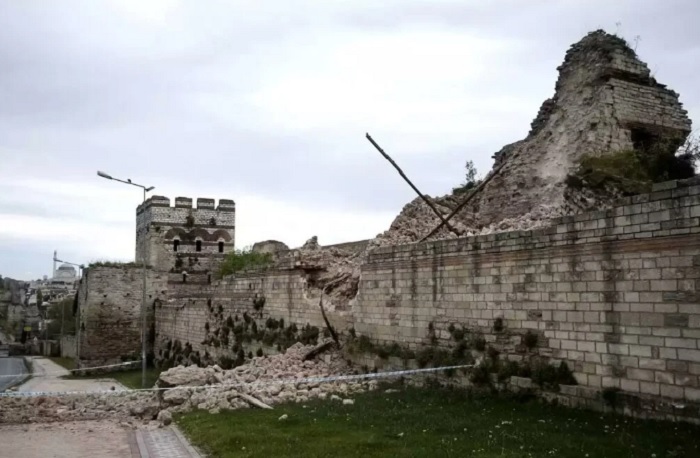 The recent collapse of part of the historic Byzantine wall in the Topkapi neighborhood of Constantinople has raised concerns over the maintenance of a range of iconic ancient Greek, Byzantine and Roman sites in Turkey.

Part of the Theodosian Walls, which were built in the 5th century, finally collapsed earlier in the week.

When well-manned, the Walls were almost impregnable for any medieval besieger, saving the city, and the Byzantine Empire with it, during sieges by the Avar-Sasanian coalition, as well as the Arabs, Rus, and Bulgars, among other peoples.

The advent of siege cannons which used gunpowder rendered the fortifications vulnerable, but cannon technology still was not sufficiently advanced to capture the city on its own, and the walls could even be repaired while reloading.

Ultimately, the city fell from the sheer weight of numbers of the Ottoman forces on May 29, 1453 after a six-week siege.

Pierre Antoine Colombier, a French enthusiast of ancient history and art has compiled a grim list some of the many historic Greek sites in Turkey that have been shamefully left in disrepair and ruin.

Speaking to Greek Reporter, he says he was initially startled by the poor state of some of the monuments and he soon began his own research using open sources, even including such tools as Google’s Street View. “I quickly came to the conclusion that many ancient sites were abandoned by Turkey,” Colombier laments.

He says that although monuments in western Turkey, and especially along the Aegean coast, are better maintained, in Anatolia there is “a completely different story.”

“Some major cities of the Byzantine Empire and Christianity are neglected, and ancient Nicaea/Iznik is a good example of this,” he notes.

The current state of greco-roman-byzantine vestiges in inland Anatolia.
Everything is abandonned by Turkey (to be fair, even the cities are).@byzantinepower

Colombier dismisses the theory that Turkey simply wants to destroy the Christian heritage of the area.

“Some in Turkey may want to do this, but they are a minority,” he says. “Turkey lacks the resources to invest in its own economy and its own people, so it is unlikely it will invest for a heritage they may not even care about.”

A tower of the Theodosian Walls in Sulukule
collapsed today
Photos today (Anadolu Ajansı) and 2017 pic.twitter.com/lDGhHqTWqs

6. Kelainai/Apamea in Phrygia doesn't get much more attention.

An european team made some work here afaik (I think mainly french people).
But everything is under vegetation, especially its theatre. pic.twitter.com/qHbXlrZsC6

3. The vestiges in Philadeplhia (modern Alasehir)
In picture one : the roman theatre (yes you cannot even see it). Picture 2 shows that the theatre is here, somewhere.

Then the state of its walls. pic.twitter.com/vOzw6UIfmo