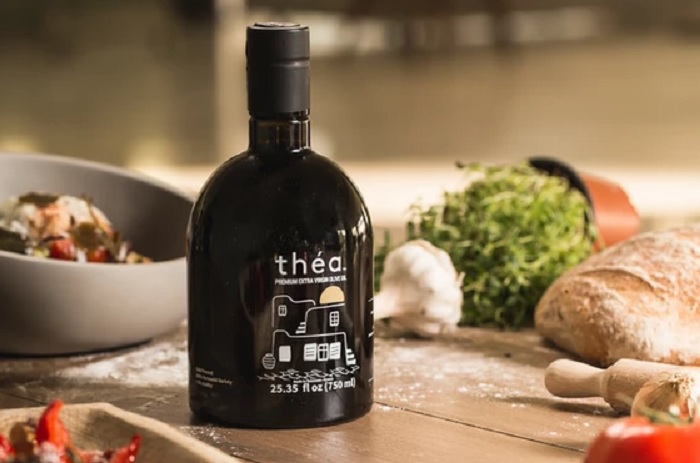 A family business in Kalamata, in the Peloponnese, has made inroads into the ever-expanding market for high-quality, extra virgin oil by being featured on television’s HSN channel, which is broadcast to over 100 million households in the USA.

Théa Olive Oil, founded in 2018, produces a monovarietal oil which is made from 100% Koroneiki olives. The Koroneiki olive is considered the “queen of olives” in Greece, and is recognized worldwide as one of the preferred olives for oil production. This variety of olive is native to the Peloponnese region of southern Greece.

Eliana Eliopoulos and Vasilis Militsis, owners of Théa, harvest the olives from their family groves in the Fall each year, throughout October and November, which is considered an early harvest for the fruit. The olives are still ripe and green at this time of the season, and they produce a more pungent juice which contains higher levels of polyphenols and antioxidants.

“It’s a small family business… the olive oil is coming straight from the oil press, and is immediately placed into bottles for the market. There is no middleman involved in the production process,” Militsis told Greek Reporter in a recent interview.

The name “Théa”, meaning “view” or “scenery” in Greek, was inspired by the beautiful landscapes of Greece – from the breathtakingly blue waters of the Mediterranean sea, to the foothills and mountains of the Peloponnese region, covered with olive trees, he explains.

“Our olive oil’s special characteristic is its low acidity, less than 0.3 percent,” Militsis noted. “The consumer can tell from the color… Unlike most olive oils, which have a yellowish complexion, our extra virgin oil is deep green in color, and thicker in texture.”

Current production is about 3,000 bottles per year, which are mostly geared for export. Théa, which is sold via Amazon, has already received praise from many consumers in the US.

“We are currently keeping our output low because we want to maintain the high quality of our product,” Militsis added.

Recently, the renowned Greek restaurant Spondi, a member of Grandes Tables Du Monde, and which has been awarded two coveted Michelin stars, has become a client and uses Théa olive oil in its culinary creations.

In the medium term, the company plans to raise its output and also include other traditional Greek products in its marketing campaign in the United States.

The health benefits of olive oil are unrivaled, and research reveals more benefits of this product nearly every day. Olive oil is the cornerstone of the Mediterranean diet – an essential component of the diet in the part of the world where people live longest.

Extra virgin olive oil is a known natural superfood which contains antioxidants and polyphenols. It is naturally gluten/cholesterol/sodium-free, and is also a natural source of Vitamin E.