By Anastasios Papapostolou
April 1, 2020
Facebook
Twitter
WhatsApp
Linkedin
Email
Greek Prime Minister Kiriakos Mitsotakis, who was among the first EU leaders to implement a strict quarantine in Greece, in now transferring the authority of enforcing the quarantine to Greek women.
The decision took most by storm but police sources say it had been planned since a few weeks ago, when police was needed to help in hospitals in vital positions for the fight against the Coronavirus.
The PM made his decision known with a tweet in the early hours of Wednesday: 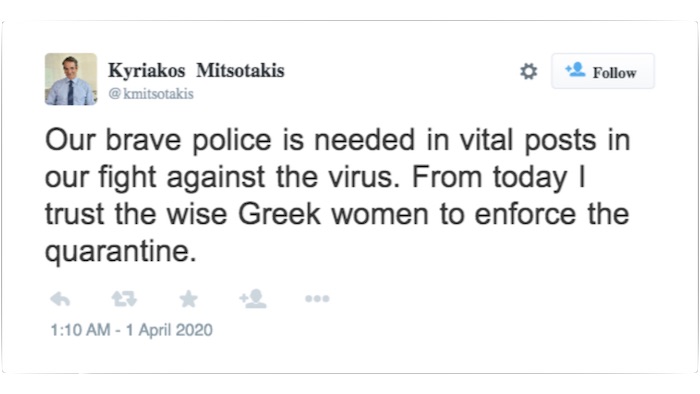 “Police will continue to assist in enforcing the quarantine if needed on a case by case basis, but this won’t be its primary responsibility,” a Greek official clarified.
The amendment to the current quarantine law transfers the power of issuing the necessary permits primarily to mothers and grandmothers, as well as wives and sisters where there is no mother or grandmother.

“Women have been defending the Greek household for thousands of years, since the Ancient times when every Greek woman was the protector of ‘estia'” noted the President of the Hellenic Republic Katerina Sakellaropoulou.
It is also true that women, and especially Greek women, are also experts on discovering germs and dirt where you think there is none, so this might be another skill that comes in handy.
“If one person of the household is infected, the whole family is in danger, notes Antonia Parisi, who sees this as a necessary step for a family’s wellbeing. “Women are best to protect the family,” adds the shop owner and mother of two from Piraeus, Greece.

Some mothers have also come up with a unique jacket that has a see-through pocket  fitting exactly the quarantine permit document so it can be seen without even being touched.
“At the same time, I know for sure that my son will be wearing his jacket because it carries his permit” says Foteini Parasxaki of Athens, one of the women who had the idea for the innovative jacket.

However some Greeks are not happy with the move. Most complain that Greek mothers and wives are far stricter in accepting fair reasoning to go out during a pandemic.
“I don’t know if I will ever see the light of day,” says Petros Kakavas from Peristeri, Athens who in absence of a mother and a grandmother, has to ask his wife for permission to leave the house.
In ancient Sparta the male fighters’ health was a responsibility of their mothers and wives. It is since then, we have the saying behind every strong man there is an even stronger woman. But sometimes history just repeats itself.
Happy April 1st, aka April fool’s day!