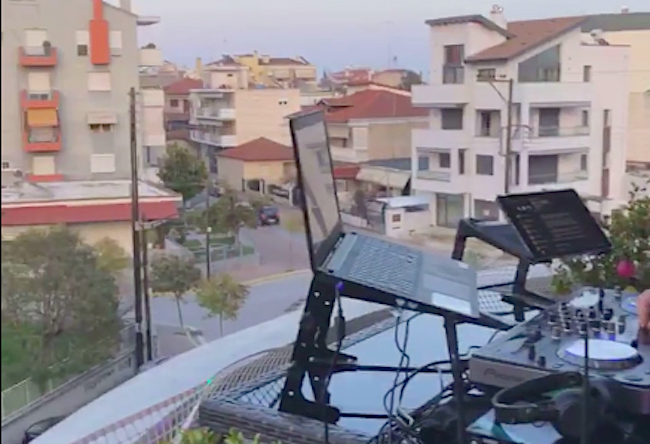 Fifty-one DJs in the Greek city of Katerini on Saturday took their laptops and sound systems onto their balconies and invited all their neighbors to come out on their own and join in a party to exorcize the coronavirus.
Under the slogans “Stay Home” and “We Party,” the 51 DJs, from the Pieria region in Macedonia, synchronized their music to play the same set and invited all the residents of Katerini to come out on their balconies and join the party.
The aim of the mass balcony part was to raise the spirit of people who live in fear of the coronavirus pandemic, to take their minds off the global tragedy.
The 40-minute set for the balcony party was even broadcast via local radio stations so that the music – and the message – reached as many people as possible. And based on social media accounts, the event was a great success.
However, that was not the case in Kozani, Macedonia. The initiative of a Kozani DJ to go out on his balcony and play a set for his neighborhood did not end well.
According to kozanimedia.gr, some neighbors apparently did not like the music and called the police. Despite the fact that neighbors on dozens of balconies were enjoying the party and applauded him, some complained about noise pollution and the police arrived and asked the DJ to stop.