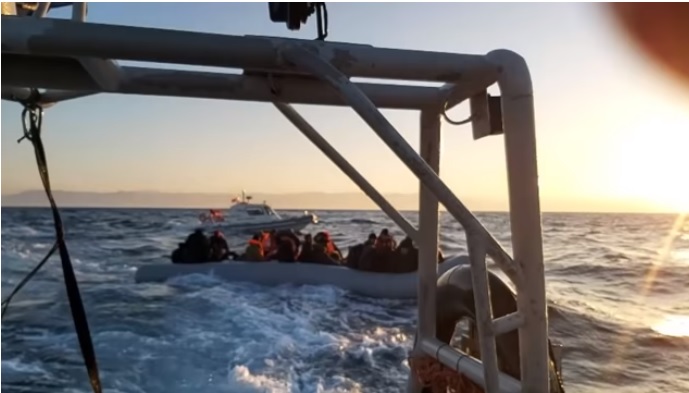 Greek security forces are attempting to stop thousands of refugees and migrants from entering Greece after Turkey’s declaration that it will no longer stem the migrant flow out of their country. Since Friday, the number of migrants has surged along the banks of the Evros River, the border between Greece and Turkey.
Updates
19:48: ”Neither the 1951 Convention Relating to the Status of Refugees nor EU refugee law provides any legal basis for the suspension of the reception of asylum applications,” the UNHCR stated.
19:47: The UNHCR says that ”all States have a right to control their borders and manage irregular movements, but at the same time should refrain from the use of excessive or disproportionate force and maintain systems for handling asylum requests in an orderly manner.”
19:45: The United Nations Refugee Agency (UNHCR) issued a statement with which it is ”appealing for calm and an easing of tensions on Turkey’s borders with the European Union in light of the present increased movements of people there – including refugees and asylum-seekers.”
19:40: The Greek Premier Kyriakos Mitsotakis informed the American President about the situation on the border.
18:25: Greece says 24.203 attempts of illegal entry into the country have been prevented from Saturday morning until now. 183 who managed to enter, have been arrested.
18:20: 4,354 individuals were stopped from entering Greece in Evros on Monday
18:15: The Executive Director of Frontex has agreed today to launch a rapid border intervention to assist Greece.

The Executive Director of Frontex has agreed today to launch a rapid border intervention to assist Greece in dealing with the large numbers of migrants at its external borders. https://t.co/0fYVDlwlKM pic.twitter.com/TmEu9PvvSb

17:25: The Greek authorities send text messages to deter those who wish to enter Greece.


16:40: Greece’s opposition SYRIZA party accuses the Greek government of severe mistakes and asks the EU to assume its responsibilities by deciding sanctions on Turkey if Ankara does not immediately return to the implementation of the EU-Turkey Statement.

16:30: Our exclusive photograph shows the smashed windshield of a Greek Army vehicle in Evros after apparently having had rocks thrown at it.


16:25: Greece continues to increase its border security with police and military personnel.

15:35: Turkish President Erdogan accused Greece of using real bombs, not just the tear gas, against refugees and said the country would be held to the account in the international community.

Turkish President #Erdogan accused #Greece today of using real bombs, not just the tear gas, against refugees to dissuade them from coming, vowed Greece would be held to the account in the international community. pic.twitter.com/Z0661kqgU9

15:05: Turkey’s President Erdogan says from Ankara: ”The gates are now open. You have to take your fair share,” and added that ”soon, that number (of the refugees and migrants who try to reach Europe) will be millions.”

14:10: French President Emmanuel Macron expresses ”full solidarity” with Greece and Bulgaria and says France is ready to ”contribute to European efforts to give them rapid assistance and protect the borders.”

13:30: The Greek Coast Guard publishes a video showing a Turkish Coast Guard vessel shadowing a boat with migrants and refugees. According to the Hellenic Coast Guard, the footage shows that Turkey is encouraging migrant vessels to sail to the Aegean islands.


13:10: Guy Verhofstadt, a prominent MEP of the Liberal ”Renew Europe” party of the European Parliament says ”the EU has to stand by Greece and fight Erdogan’s blackmail.”

13:02: The Parliamentary group of Greece’s SYRIZA party in the European Parliament asks for an immediate debate in the Parliament’s plenary about the situation in Greece’s Evros border.

13:00: Greece’s Supreme Military Command of the Interior and Islands announced that it will be conducting exercises along the country’s eastern border, from Samothrace to Castellorizo.
12:55: Greece’s IV Army Corps is conducting exercises in the county of Evros, using machine guns, rifles and pistols with live ammunition.
12:51: Clashes erupt in the Moria refugee and migrant camp on Lesvos.


12:48: The spokesperson of the Greek government says that footage showing a fatality in Evros is fake news.

Video showing fatality on Greek-Turkish border is fake news. We call upon everyone to use caution when reporting news that furthers Turkish propaganda. #fakenews #fakeTurkishPropaganda

12:45: A tragic incident took place in the early hours of Monday, as a young child drowned off the island of Lesvos.
12:40: The entire leadership of the European Union will be in Evros on Tuesday, along with Greek Prime Minister Kyriakos Mitsotakis, to assess the situation along the Greek-Turkish border.

EU Commission President @vonderleyen and @EP_President David Sassoli will join @eucopresident Charles Michel and me tomorrow on the Greek-Turkish land border.
Important statement of support by all 3 institutions at a time when Greece is successfully defending EU borders.
🇬🇷🇪🇺

—
19:40: A meeting of the Government Council for Foreign Affairs and Defense is underway in Athens, while photographs from the Evros border depict the current situation there.


19:05: Video shows Greek military personnel spreading the message in several different languages that the Greek border is closed to those who attempt to enter the country illegally.

18:55: The #GreeceUnderAttack hashtag is trending on Twitter both in Greece and Turkey, where dozens of fake accounts spread fake news about the situation, in a clear attempt to mislead the public as well as refugees and migrants.
18:52: The EU is calling an extraordinary meeting of its Foreign Affairs Council next week to discuss the situation in Idlib, Syria which was given by Turkey as a reason for the Greek-Turkish border escalation.

18:30: Video shows tear gas being thrown from the Turkish side to the Greek one.


17:50: Hundreds of individuals remain on the Turkish side of the border, waiting to find a chance to cross the border and enter Greece, and hence, the EU. 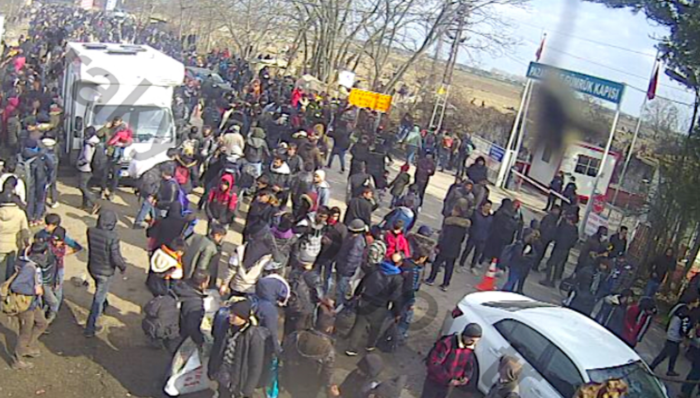 17:07: Greek armed forces are sending reinforcements to Evros. This footage is from earlier on Sunday, where a column of army vehicles are seen on Egnatia Highway heading toward the Greek-Turkish border.

17:05: Greek Reporter learns that a Greek police officer at the border was injured when a rock hit his face. He was rushed to Didimoticho Hospital and is currently in good condition.
17:00: Greek police are using water cannons to disperse a large crowd of migrants and refugees which has moved closer to the Greek border. Greek journalists who had been called for a briefing by officers were evacuated from the area as their security was compromised, Greek Reporter learns.


16:55: New clashes erupt in the area between the Greek and the Turkish border, as refugees and migrants throw rocks and the Greek police respond with tear gas.


16:45: The Greek Army is transmitting messages in six languages, informing the refugees and migrants of the Turkish side that the borders are closed. The languages are English, Punjabi, Farsi, Pashto, and Bengali.
16:40: Video shows a group of people attacking individuals on Lesvos, and throwing their cameras in the sea. The victims are believed to be reporters or members of an NGO.

16:00: Angry demonstrators are preventing new refugees and immigrants from getting to the port of Thermi on Lesvos. Hundreds of local residents gathered at the local port to push back a migrant boat carrying at least 30 people, including women and children.

15:15: Greece’s public broadcaster ERT reported that the Greek Navy will send additional forces to the Eastern Aegean islands to guard the sea border.
14:30: The demand for solidarity with Greece gains cross-party consensus in Europe. Ska Keller, the President of the Greens/EFA group in the European Parliament says that ”Erdoğan is using refugees as pieces in his war game,” asking for solidarity with Greece and those who need protection.

Erdoğan is using refugees as piece in his war game. Europe shouldn't accept to play this game but act on its values. We…

14:10: Reports suggest that Greece’s Foreign Ministry has summoned the Turkish ambassador to Athens.

.@GreeceMFA has summoned the Turkish Ambassador in Athens.

Disinformation campaign by Turkish authorities continues. The reality: 10,000 people were prevented from entering Greek territory (all along Evros) from yesterday morning to this morning. 73 -unrelated to #Idlib– persons illegally crossed, were arrested & accordingly prosecuted https://t.co/bqN2V6CLDM

No one can cross the Greek borders. All those attempting illegal entry, are effectively prevented from entering. Numbers cited by Turkish authorities are entirely false and misleading.

It is our common responsibility and duty to protect European external borders. This is why we should show our solidarity to Greece and @PrimeministerGR.

13:46: Video emerges showing Saturday’s efforts by Greece’s military to deter the refugees and migrants, firing into the air.

#Frontex is in close contact with Greek authorities regarding additional support we can provide. We are redeploying equipment and additional officers to Greece and closely monitoring the situation pic.twitter.com/vAPcvEN9Lt

13:35: Video from Saturday shows Greek forces trying to deter the crowd by throwing tear gas while being under petrol-bomb attack themselves.


13:30: Individual refugees and migrants are seen on Greece’s side trying to leave the border area.

13:20: At least 500 refugees and migrants have reached the shores of Greece’s Eastern Aegean islands since Sunday morning.
13:10: Greece Sends SMS text messages to all those who try to enter Greek territory from Turkey, saying that the country’s borders are closed for those who try to cross illegally.

12:45: The Greek government calls an extraordinary meeting of the Government Council for Foreign Affairs and Defense (KYSEA) in Athens.
12:40:  Night video emerges showing refugees and migrants trying to cross the Evros River to enter Greece.

lol
12:30: The Greek government says that its border forces have stopped approximately 10,000 people from entering the country illegally in Evros.

Greece recorded a total of 1,269 new cases of the novel coronavirus on Sunday and 36 new deaths, according to the nation's authorities.
Ancient Greece

A 2,300-year-old tomb in southwest Turkey—once revered as a holy Islamic site—turns out to be the tomb of ancient Greek boxer Diagoras.
Greek News