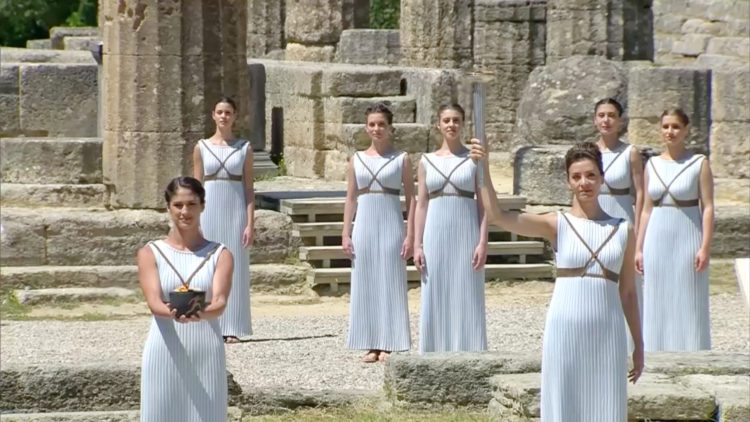 All the details concerning the Olympic Flame and Torch Relay Ceremonies, which will take place in Greece in March, were presented on Monday at a special informational event held at the Hellenic Olympic Committee in Athens.
It was disclosed there that the Greek gymnastics team will occupy a prominent position during the ceremonies, and these athletes will play a leading role in both these important rituals, which will mark the beginning of the Olympic 2020 festivities.
Monday’s presentation was given in part by Spyros Kapralos, the President of the Hellenic Olympic Committee and a member of the International Olympic Committee, and Thanasis Vassiliadis, the President of the Olympic Committee of the Olympic Torch Relay.
”We want the symbol of Olympism to travel to every corner of Greece and enlighten everyone with the timeless messages of peace, friendship, compassion and fair play,” Kapralos noted at the event.
On March 12, the hallowed ceremony of the lighting of the Olympic flame will take place in Ancient Olympia, in the presence of Prokopios Pavlopoulos, the President of the Hellenic Republic.
One week later, on March 19, the ceremony of the handing over of the flame to Japan will be held in Athens’ Panathenaic Stadium, where Ekaterini Sakellaropoulou, the new President of the Hellenic Republic, will also be present.
The Torch Relay will go on for eight days in Greece and cover 3,200 kilometers (1,988 miles). The flame will pass through 31 cities and 15 archaeological sites in its journey across the country.
Vassiliadis noted that this entire effort will not cost one single euro to the Greek taxpayer since it relies solely on sponsors and the combined volunteer efforts of more than 1500 individuals.