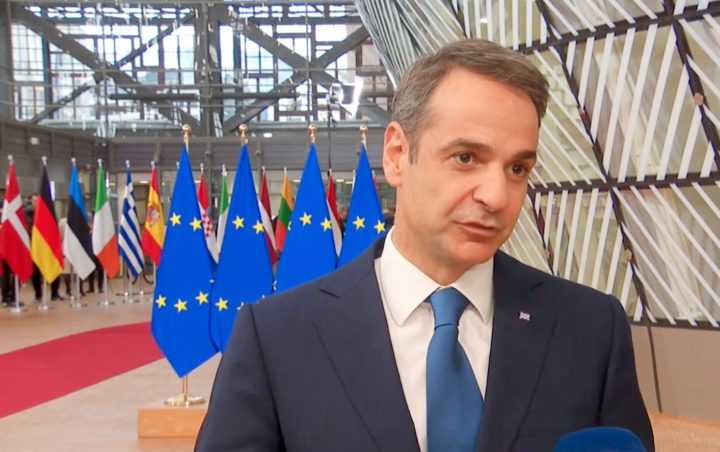 Greek Prime Minister Kyriakos Mitsotakis landed in Brussels on Thursday for the upcoming European Union Summit, which is tasked with deciding on the Union’s 2021-2027 budget.
Arriving at the Summit, Mitsotakis said that Greece is coming to these meetings to demand actual, not just verbal, solidarity with the refugee and migrant issue that the country is currently facing.
Mitsotakis also spoke about Athens’ stance on the negotiations for the next EU budget, which will try to strike a balance between the Union’s ambitious plans in many different areas and the ramifications from Brexit.
Since the UK was one of the Union’s largest contributors and they will be no longer chipping into the Union’s treasury, there will be significant fallout from this process.
”We can’t do more with less,” was Mitsotakis’ laconic phrase, showing Greece’s stance that the EU must be ambitious and increase its budget in order to cope with the demands of the times.
”I’m coming into this negotiation with a clear national line: “We want to protect our farmers’ incomes as much as possible, but also help them make the transition to a more environmentally friendly-way of production,” Mitsotakis declared, referring to the EU’s common agricultural policy, which is in the hands of Brussels rather than its member states.
European farmers across the Union are furious with the prospect of losing billions in subsidies due to a less ambitious budget, which aims to prioritize other sectors over their own.
The Greek premier also stressed Greece’s stance on a range of other issues, from climate change to investments.
”We need resources that will enable us to make a fair transition to a low-emissions economy,” Mitsotakis noted. The EU has pledged to become the world’s first economy with net-zero greenhouse gas emissions.
The 27 heads of states of the Union will have to arrive at a compromise between those nations arguing in favor of a more austere budget and others, including Greece, which will fight for more funds for a number of sectors in the European economy.