Turkey Repeats Call for the Demilitarization of Sixteen Greek Islands 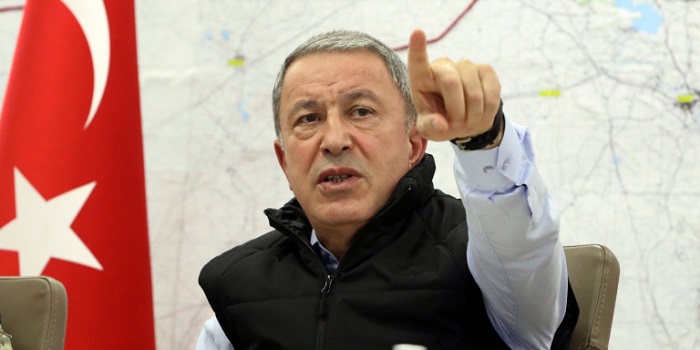 The Turkish defense minister Hulusi Akar called again on Sunday for the demilitarization of sixteen Aegean islands, claiming that Greece is violating international agreements.
In an interview with Turkish newspaper Hurriyet, Akar said Greece has stationed armed forces in 16 of 23 major eastern Aegean islands, violating a series of treaties.
Turkey claims that the militarization of the Eastern Aegean Islands was restricted in the Treaty of London in 1913, and their demilitarized status was confirmed in the Treaty of Lausanne, signed in 1923. The 1947 Treaty of Paris, which ceded the Dodecanese from Italy to Greece, also confirmed this demilitarized status.
Akar made a similar claim in January forcing the the Greek Foreign Ministry to respond accusing Turkey of acting in a hypocritical manner in invoking international law.
At the Hurriyet interview, the Turkish defense minister also claimed that Greece’s actions make finding common ground with Turkey difficult.
He also accused Greece of its “globally unprecedented” discrepancy in claiming a 10-mile national airspace, more than its 6-mile territorial waters.
“Greece is our ally in NATO and we expect it to stay faithful to good neighborly relations and to treaties it has signed,” Akar added.