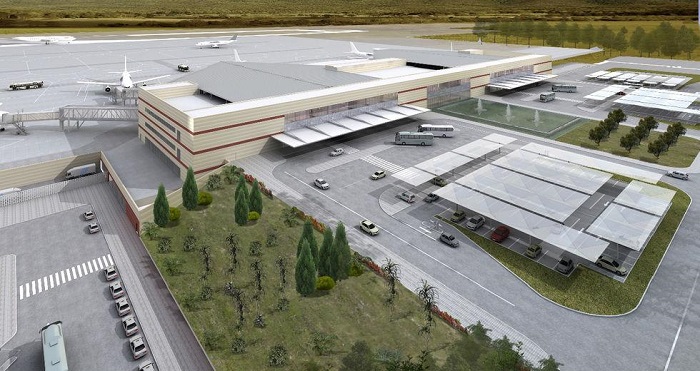 Greek Prime Minister Kyriakos Mitsotakis on Saturday attended on Saturday the foundation stone ceremony of the new airport at Heraklion’s Kasteli, Crete.
Mitsotakis promised that the project which has been had been stalled for many years, will be ready to receive the first passengers in 2025.
The prime minister underlined that the current Kazantzakis airport is barely managing to serve 8 million passengers annually, “is noisy and burdens the Heraklion region with extra traffic,” whereas the new airport will be “environmentally friendly (…) will feature cutting edge technologies (…) and will simply be the best airport in the country.”
The Greek state will hold a 46 percent of the shares capital, added the Greek Premier, with the exclusive shareholders being the Greek State, and the Ariadne Airport Group, a joint venture between GEK Terna and India-based GMR Airports Limited.

As far as covering initial investment costs is concerned, Mitsotakis said that the Greek state “will first put down 180 million euros and another 125 million euros down the line,” together with the “160 million euros put down by the private shareholder.”
On the airport’s projected profitability, he said “the Greek state alone will soon see a return of more than 1.2 billion euros,” while in 35 years’ time, “when the Greek state will be the sole owner, profits will exceed two billion euros,” he weighed.
The new airport will have a dual 3.2 km (2-mile) runway which falls within acceptable international standards. An apron of 400 acres, on which approximately 30 aircraft can taxi and park, is envisaged for the new airport.
The terminal building will have five levels and a total area of ​​72,000 square meters (775,000 square feet), of which 13,000 square meters are intended for commercial use and 1,100 square meters are dedicated as a permanent exhibition space.
In addition to the construction of the airport, other major projects which are planned for the Kastelli Airport vicinity include the construction of new roads and the upgrading of existing local roads.