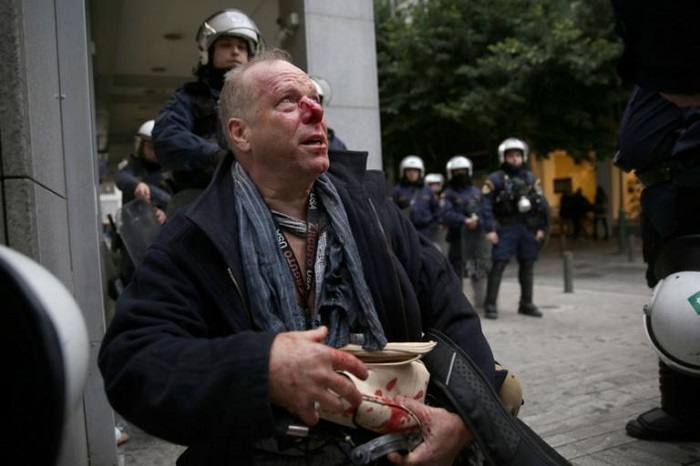 The Greek government has condemned what it termed the “fascist attack” against a German journalist during an extreme-right demonstration in Athens on Saturday.
Thomas Jacobi, an Athens correspondent of the French newspaper Croix and the German television channel Deutsche Welle was injured by extremist thugs who were demonstrating against the presence of migrants in Greece.
Greek government spokesman Stelios Petsas said “[The government] condemns in the strongest possible terms the fascist attack on journalist Thomas Jacobi at Syntagma Square. The freedom of the press and the protection of those exercising it is the duty of every democratic state. The government’s stance on forces of violence and extremism who fight (against) the freedom of expression, pluralism and democracy is relentless.”
Petsas added that the authorities were already investigating the incident to find those responsible for the violent attack and bring them to justice.
According to the Foreign Press Association of Greece, this is the second such attack committed against Jacobi by representatives of radical circles. Members of the Greek neo-Nazi party Golden Dawn attacked Jacobi in January of last year in Athens, along with a cameraman and a photojournalist.
Jacobi, who stated that he would file a complaint, was involved in making a documentary about the neo-Nazi party Golden Dawn, which aired in 2016.
He believes he was attacked because he was recognized as one of the film’s creators. “They hit me for four minutes until the cops came. Nobody intervened,” Jacobi told interviewers.