GRNews
GreekReporter.comGreeceMeet the Greek Couple that Rounds the World on a Tiny Vespa...

By Nick Kampouris
January 18, 2020
Facebook
Twitter
WhatsApp
Linkedin
Email
Alexandra Fefopoulos and Stergios Gkogkos are a Greek couple that decided to leave everything behind and go on a trip around the world using their tiny Vespa scooter.
“One year, 14,697 kilometers, two new pistons, 118 liters of beer, 590 liters of gasoline, 15 liters of ointment, and 365 days full of new experiences,” is the sentence that describes the couple’s last year of unimaginable adventure.
Stergios and Alexandra travel around the globe on a Vespa PX200, dubbed ”Kitsos!”
It was in 2013 when they both left Greece – each with different plans – because of the socioeconomic crisis that hit the country so hard.
However, they were destined to meet by chance in the Democratic Republic of Congo and shortly thereafter embark on a “trial”, as they say, traveling with “Kitsos” in South Africa and Lesotho.
Since December 2014, Alexandra and Stergios have been traveling together and following their previous trips to Africa and South America, last year they decided to travel incessantly; apparently, they do not intend to stop… 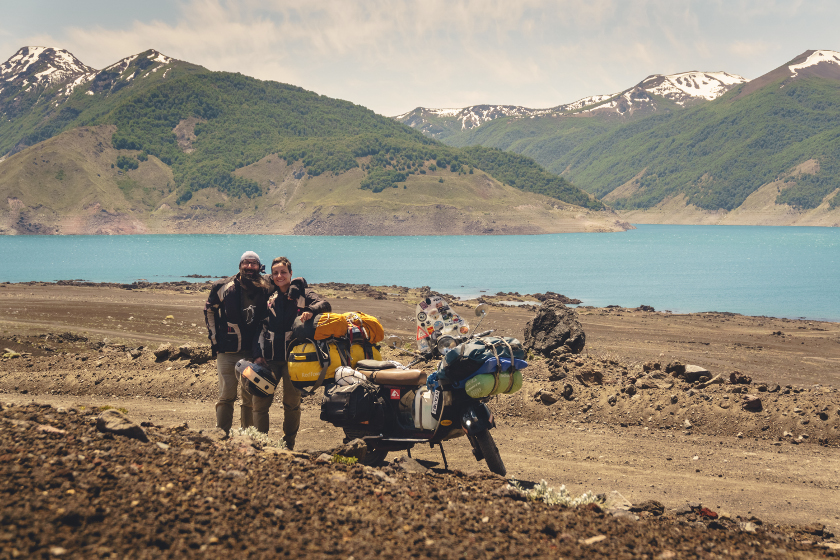 Speaking with Greece’s AMNA news agency, the couple said that a year of traveling is ”too little.”
”We feel like we just started,” they said.
Stergios and Alexandra work in between their trips to earn some money to finance their wild dream of conquering the world on a scooter.
On Januar 2 they had their one-year anniversary since their new, non-stop adventure began.
This time, they’re exploring the stunning scenarios of South America.
They were amazed by Paraguay’s beauty. They were also surprised when they realized how many things the Argentinians and the Greeks share.
”People (in Argentina) think that we come from a country (Greece) that is very organized, very clean, with all our problems solved and they get impressed when they realize how much we have in common…” the couple says.
The two explorers now plan their next trip, as soon as their beloved”Kitsos” is ready since it currently has to go through some …repairs.
Their next step, Chile and Peru, two other intriguing and promising Latin American countries.
Good luck with your adventures, Stergio and Alexandra!
(With information from AMNA)