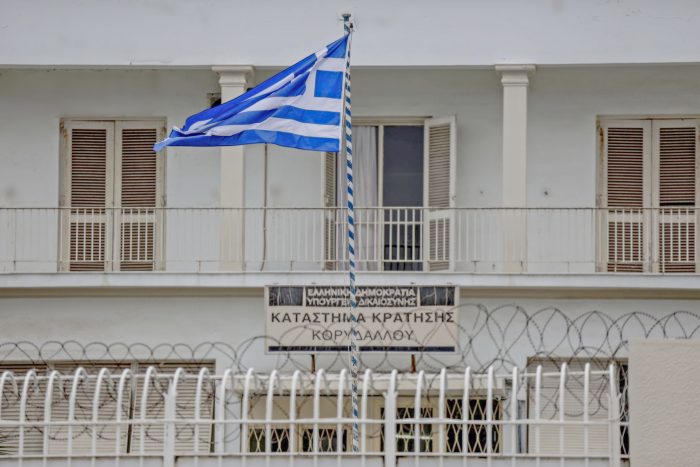 The Greek Ministries of Defense and Citizen’s Protection on Monday signed a Memorandum of Cooperation under which the procedures for the replacement of the infamous Korydallos prison complex will soon begin.
One of the main pledges of the conservative government elected last July was to shut down Korydallos Prison once and for all, and create a brand new, high tech facility in an area well away from the urban metropolitan area of Athens.
It was recently decided that the new prison will be constructed at the former ”American Convenience Camp” of Aspropyrgos in West Attica, in facilities which once operated as a NATO military base.

Defense Minister Nikos Panagiotopoulos, deputy minister of Citizen’s protection Eleftherios Economou and Secretary-General of the Ministry of the Citizen’s  Protection’s Anti-Crime Policy department Sofia Nikolaou signed the memorandum, taking the first step toward the fulfillment of a decades-long demand by the residents of Korydallos.
According to the provisions of the memorandum, the Design and Construction Unit within Greece’s Ministry of Defense will assist in the initial procedures which are required for the massive project to get underway.
According to the government’s plan, the new central jail in the Greek capital will acquire all the latest technological tools, making it one of the most modern prisons anywhere in Europe.
The new facility is expected to have high-definition automatic cameras, electronic security cells and an array of other brand-new tools enabling more effective management of the prison.
The Korydallos Prison Complex houses both maximum-security male and female sections. Its construction began in 1961 and it first opened for operation in 1967.
However, the facility is currently overcrowded and its condition is far from acceptable by modern standards.
After its relocation, the premises of the existing prison are expected to become areas for public use, including parks, which are much-needed in this urban area of Piraeus.