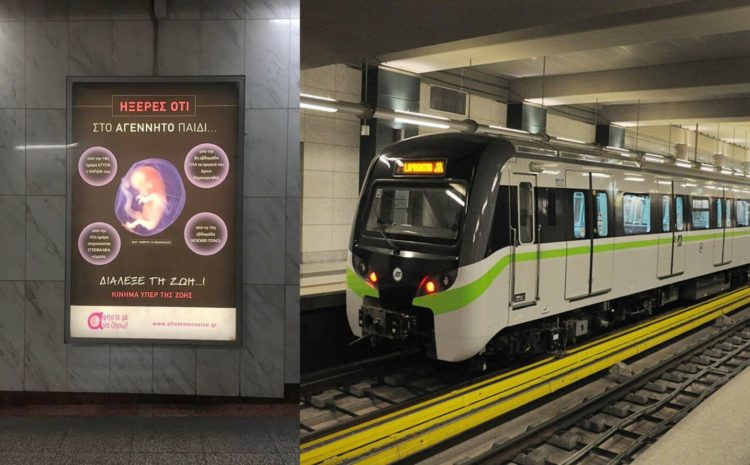 Posters put up by a pro-life, or anti-abortion, organization appeared in Athens‘ metro stations on Monday, promoting the positions of the Greek anti-abortion movement called ”Afiste Me Na Ziso” (”Let Me Live”).
Since the very first moments of their appearance, the banners have sparked widespread reactions as well as condemnation by politicians, celebrities and members of the public.
The title atop all the posters is ”Did you know that…” and they then go on to inform the public about the different stages of the evolution of a human embryo.
Many people have used social media platforms to ask the Attico Metro operator of the Athenian underground to take down the posters, while members of the Social Democrat KINAL party, as well as of the left-wing SYRIZA, have expressed their distaste for the banners showing the embryo.

Paulos Christides, the spokesman of Greece’s PASOK and KINAL parties, stated in a Facebook post, ”Maternity is a free choice, not a product of coercion.”
”The legalization of abortions in Greece was enacted by PASOK’s bill No 1609 in 1986 after decades of bans. It is the choice and right of every woman to have access to legal and safe abortion, based on international medical protocols,” Christides went on to note.
Similar statements have been made by dozens of MPs from other progressive parties in the country.
Members of the Youth of SYRIZA even put up their own posters right on top of the anti-abortion banners. The SYRIZA-Youth banners were titled ”Did you know that our bodies belong to us?”
It should be noted that Greece has never actually had any public debate about the issue of abortion since at least the mid-1980s, when it was legalized.
The country was one of the very first to legalize abortion, and there was a wide consensus by both left-wing and right-wing parties on the matter at the time.
However, pro-life groups have made a dynamic appearance in the country’s public sphere recently, prompting heated debates on the issue throughput Greece.
Following the widespread condemnation, Greece’s Ministry of Transportation issued a statement on Monday afternoon informing the public that it had ordered the company Urban Rail Transport – STASY, which operates Athens’ Underground, to take the posters down ”as soon as possible.”
”The campaign that started today against abortion is against a fully-guaranteed and unquestionable right of women. Campaigns in public places should not divide the public opinion or offend women who have been forced to make such a difficult choice in their lives,” the Ministry stated, adding that neither the ministry nor the government had had any prior information about the pro-life campaign.
The Ministry also called STASY to explain its rationale for allowing such a public information campaign to have taken place in Athens’ metro stations, ordering it to take all the posters down as soon as possible.