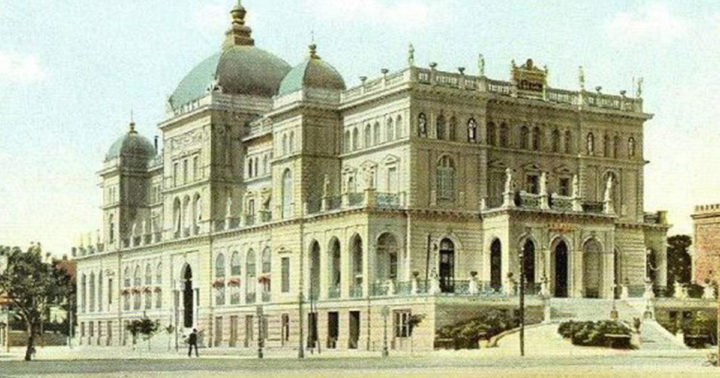 Many claim that the modern ”Golden Age” of Athens lasted from the second half of the nineteenth century all the way up to WWII.
If we are being honest with ourselves, we must admit that there is plenty of historical evidence to prove that they are right.
Athens was the youngest capital city in Europe in the nineteenth century and its urban development began basically from scratch in those years, giving it a unique style which combined impressive Neoclassicism with one of ancient Greece’s most important elements: Modesty.
The new capital was courtly and impressive, yet still humble and built to a human scale.
It had a significant architectural style all its own, including impressive public buildings all the way down to the humble houses of the poorest classes.
Unfortunately, this Athens is now completely gone.
The destruction of the Second World War, along with the craze of the economic boom which Greece experienced between 1950 and 1970, transformed this once-graceful city into a chaotic concrete jungle.
It’s no wonder why most of those who visit Athens stare at its ancient monumental landmarks of the city with awe, yet leave with a bittersweet aftertaste and a sense of wonder which could be summarized into the question ”Why does modern Athens look so awkward?”
The answer to this is simple.
Athens is a completely different city from what it was eighty years ago. And here is a list of some of its architectural landmarks that, unfortunately, have now been lost, paving the way for the epoch which transformed Athens’ urban beauty into a jumble of modern concrete boxes.

The Actaion Hotel
This monumental hotel was built in 1903 in Athens’ southern suburb of Neo Faliro.
For decades it had not only served as a leisure destination for the Athenian elites, but also for high-profile visitors, politicians, businessmen, diplomats and many others from all over Europe.
It had 160 rooms, as well as large banquet rooms, gardens and its own private beach on the Athenian Riviera.
Unfortunately, its downgrade began a few years before the outbreak of WWII. Tragically, it was also bombed during the War, but somehow its skeleton remained intact for years.
Unfortunately, instead of restoring it, the local authorities in Piraeus decided to demolish the Actaion during the postwar years.
Today, a private hospital stands in its place.
The Megaron Negreponte 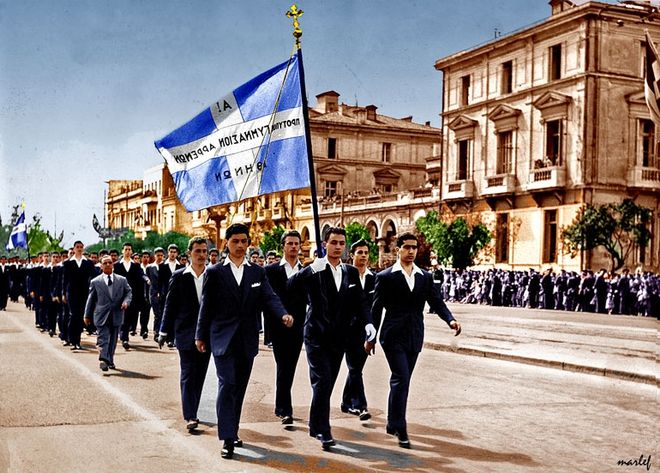 This humble yet beautiful piece of architecture stood in Athens’ Syntagma Square from 1880 until 1956.
It was a modest yet beautifully-detailed residential building which hosted some of the most prominent members of Greek society’s elite.
The Negraponte was part of a series of luxurious homes which created the urban background of the traditional stroll the Athenians would take every day as they walked toward the Royal Gardens (today’s National Garden of Athens).
Unfortunately, the Negreponte Megaron, along with so many other beautiful residences, was inexplicably demolished in 1956.
A tasteless, concrete apartment tower block now stands in its place. 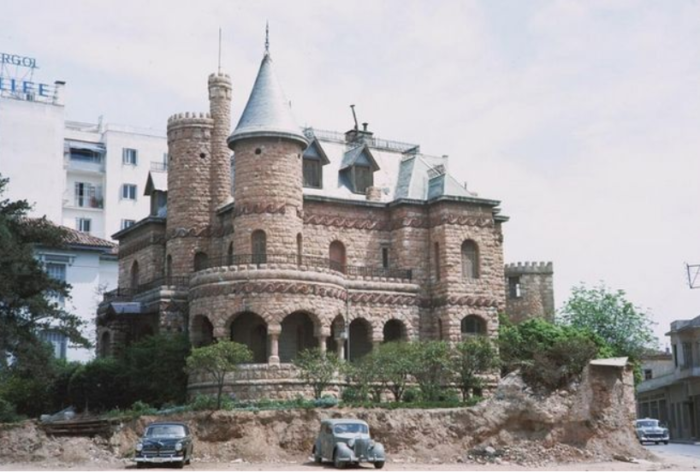 The Villa Margarita
Built as the private residence of an Armenian businessman, the Villa Margarita was an architectural masterpiece in the very heart of Athens.
Constructed in the early twentieth century, it more closely resembled central European castles than an ordinary home.
Made of stone and with architectural details which made it completely unique, this building was truly a gem in the heart of early twentieth-century Athens.
Unfortunately, the Villa’s gardens were acquired and then destroyed by the state, because it desired to broaden the nearby streets and turn them into avenues.


The fairy-tale-like building was demolished in the 1970s. A plain, boxy rectangular tower block of offices soon rose up in its place.
The Municipal Theater of Athens 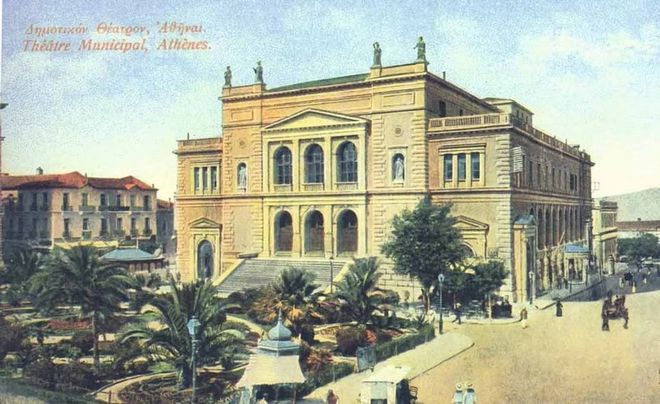 Opened in 1888 and designed by Ernst Ziller, the “Architectural Father” of modern Athens, the Municipal Theater was an ornament on today’s Kotzia Square, close to Athens’ City Hall.
However, folk legend has it that the building began its life under bad omens.
Andreas Syngros, the man who paid for its construction, demanded the creation of a number of shops along its sides, in order to make money by renting or selling them.
This unfortunately detracted from the Theater’s beauty, much to the disappointment of the Athenians, who had expected something more impressive in the inside.
Additionally, the fact that King George of Greece fell asleep during the theatre’s opening in 1888, even annoying other audience members with his snoring, spread the rumor that something was wrong with this building.
In 1901, the Royal (now National) Theater of Greece was established, and Athens’ Municipal Theater became more of a second-class player in Athens’ cultural life.
In 1922, refugees from Asia Minor were hosted on its property, and unintentionally, this use caused widespread damage to the building, which by that time had stopped serving as a theater completely.
Adding to its string of misfortunes, the Theater also annoyed Constantinos Kotzias, the mayor of Athens at that time, whose office overlooked the theater’s back side. For this reason, he simply decided to demolish it in 1940.
In an ironic twist of fate, the square where this architectural masterpiece was located is now named after the mayor who destroyed it.
The Tsopotos House 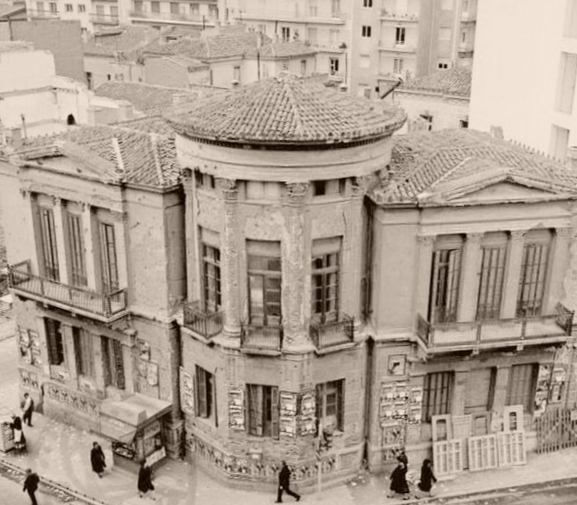 One of the most unique and distinctive private houses in all of downtown Athens once distinguished the intersection of Piraeus Street and Menandros Street.
The unknown architect who designed it had copied the Lysicrates Monument in Plaka, offering a beautiful, ancient yet modern twist to this edifice in the heart of the city’s landscape.
The elegant home survived for exactly 100 years.
Its construction was completed in 1870 and its demolition took place in 1970.
In its place, another characterless high-rise building of the 1970s stands high, reminding passersby of Athens’ dramatic, and tragic, urban renewal efforts of the last few decades.
The Pesmazoglou Megaron 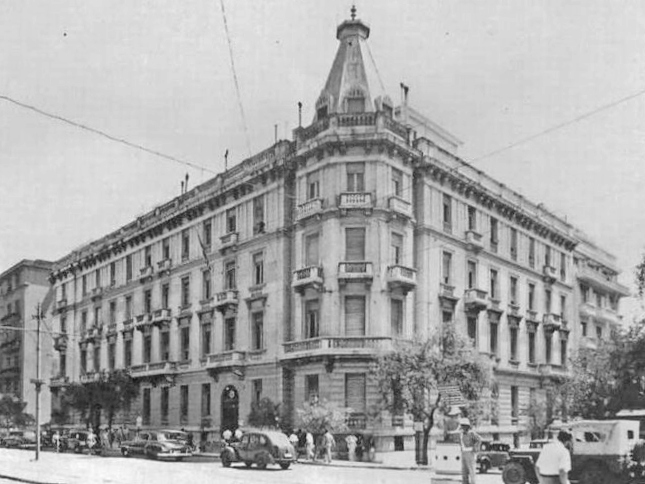 Built in 1900 and designed by Ernst Ziller for businessman Ioannes Pesmatzoglou, this block of luxurious apartments hosted numerous foreign nationals who desired to live in an apartment in downtown Athens.
For a reason which remains unknown, the building was simply cut in half in the 1960s.
The half which had an elegant corner tower was demolished and a terraced block of offices was built in its place.
Today, the “Half Megaron” still sits there, attached awkwardly to the office block, an eternal reminder of the architectural madness that this city went through in the decades after the war.
The complete list of individual buildings which were destroyed in Athens to give space to featureless, soulless concrete tower blocks can cover entire pages.
However, what matters more than reminiscing about the past is acknowledging that Athens is an example of a city which ruined its beauty on its own, and by choice, since it chose easy profits over aesthetics.
Hopefully, one day, when all this modern-day architectural madness comes to an end, this ancient and beautiful city will somehow be able to reclaim its old, timeless elegance.