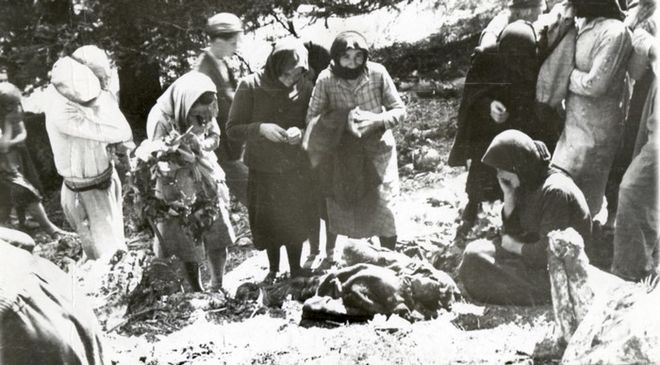 December 13, 1943 marks the date of the worst atrocity committed in Greece by the Nazi occupying forces, as more than 500 innocent civilians were executed, and the entire town of Kalavryta was burned to the ground.
The Massacre of Kalavryta, also known as the Holocaust of Kalavryta, was carried out by the German Army’s 117th Jäger Division. The extermination of the male population of Kalavryta was in retaliation for the execution of 68 German soldiers who had been captured by the Greek Resistance.

“Operation Kalavryta”, or “Unternehmen Kalavryta”, was a typical German act of retaliation in areas where there was heavy guerrilla activity. It was directed against the civilian population of the region and was one of the most barbarous carried out by the Wermacht, not only in Greece, but in Europe.
The Kalavryta and Aegialian regions had developed strong resistance forces from the beginning of 1943. The German army began to worry about the growing revolutionary activities, and wanted to destroy them with an operation which included bombing, burning and executions.

The order to carry out this operation was given after the killing of the Hauptmann Hans Schober by Resistance forces, at the Battle of Kerpini on October 17, 1943, when 86 German soldiers were captured.
The German troops initiated the attack from the three Greek cities of Tripoli, Aegio and Patras, and finally ended in Kalavryta. En route, they burned, pillaged, and destroyed everything in their way.
Their path of destruction included the villages of Rogi, Kerpini, Zachlorou, Souvardos, Vrachni, Kalanos, Vlasia, Manesi, Saradi, Massi, and others, as well as the Holy Monastery of the Great Cave and the Monastery of Omlou, south of Patras.

On December 9, the Nazis entered Kalavryta. Many residents had already left the village in fear of retaliation, but the Germans called upon the Kalavrytians to return with the assurance that they would not get hurt. Indeed, German Commander Ebersberger gave his so-called “word of military honor” to appease the restless and frightened residents.
After they burned the homes of rebel fighters and searched for Germans who had been wounded in the Battle of Kerpini, on December 12, they began packing up to leave the town.
But early in the morning on December 13, new German army forces arrived in town, along with many senior officers. The Germans rang the town’s church bells and ordered all the people to gather in the elementary school, bringing with them a blanket and food for one day.
There, they separated the men from the women and children. The women and children were told to stay in the school, while all males over 14 were led in groups to the nearby field called Kapi Rake. The field was on a slope, and had the shape of an amphitheater, offering a full view of the town. This also meant it was a difficult area to escape from.
The Germans proceeded to set the school on fire so that the men could see.

Moments later, after they had been forced to watch the horror, the Nazis machine-gunned all the men on the spot. According to German historian Hermann Frank Meyer, the head of the German forces, General Karl von Le Suire, had given clear orders to accurately record all the names of the execution victims.
In total, 499 people were murdered that day in Kalavryta. Twelve men actually managed to survive without the Germans knowing, while the total number of victims reached 677 in the wider region of Kalavryta and the neighboring villages.

The women and children who were trapped in the elementary school were nearly consumed by the flames, but they finally escaped by breaking the windows and doors. There is a rumor that an Austrian soldier who had been entrusted with their custody left one door open so they could flee.
The approximately 1,000 or so buildings in Kalavryta were all burned by the Germans, who also confiscated 2,000 head of livestock belonging to the villagers.
The massacre was memorialized in the 2014 book, Hitler’s Orphan: Demetri of Kalavryta, by Marc Zirogiannis. This historical novella tells the story of the massacre from the perspective of the Zirogiannis family.
In April 2000, then-President of the Federal Republic of Germany, Johannes Rau, visited the memorial site in Kalavryta, and expressed shame and sorrow for the tragedy. A museum dedicated to the Kalavryta Holocaust is now open in the former elementary school where the Nazis first separated the men from the women and children.