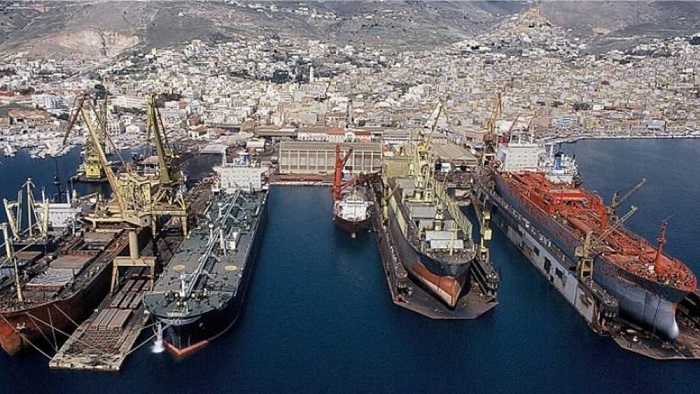 The official handing over of the reins of ownership of Syros Island’s venerable Neorio shipyard to the company “ONEX Syros Shipyards” was marked by an official inauguration ceremony held on Wednesday.
Established in 1861, the Neorio Shipyard was the very first heavy industry plant in the Balkans and was the Greek shipyard which constructed the first steam ship in the entire region.
The same shipyard also produced military equipment over the years, and in 1973 it was the pioneer in manufacturing one of the original models of the battery-powered electric car.


Today, it is one of the few remaining major industrial companies in what used to be the industrial and commercial center of Greece before being eclipsed by the large port of Piraeus.
Greek-American businessman and Onex Shipyards founder and CEO, Panos Xenokostas, said at the ceremony that he was happy to complete “a difficult transfer of ownership which took time and laborious procedures.”
Greece’s Development and Investments Minister Adonis Georgiadis said in an address at today’s event that the shipyard was nearing a state of complete collapse only 20 months ago. He stated that hundreds of shipyard workers were in despair and that absolutely no one expected its eventual transformation back to solvency at that time.
Georgiadis pointed out that Greek shipowners “now trust Neorio,” as six ships are now waiting to be repaired at the facility.

In his speech, US Ambassador Geoffrey Pyatt said that when he visited Syros two and one-half years ago, “this place was literally rusting away. Workers and suppliers had not been paid, and more than 75,000 tons of sandblast waste had accumulated at the port. Today, this strategic investment is in the hands of an American company, and the shipyard has entered a whole new era.”
The associated benefits of the newly-rejuvenated shipyard to the community are clear, the ambassador explained in his remarks. “Onex has so far invested 18 million euros in Neorio, which includes backpay of more than 8 million euros for hundreds of long-time employees and local suppliers that had built up over many years.
“Onex plans to invest another 12 million euros to upgrade the shipyard by the end of 2021,” he added, a sum which does not include over 20 million euros already invested in the island’s economy through salaries and local contracts, he noted.
“These investments have created close to 600 jobs, nearly tripling the workforce from five years ago,” Pyatt added. He later revealed interest on the part of American investors concerning the ports of Volos, following on the heels of serious inquiries regarding the ports of Alexandoupolis and Kavala.
Shipowners “no longer have to travel to Turkey, Malta, or further afield for maintenance and repairs,” the ambassador concluded.