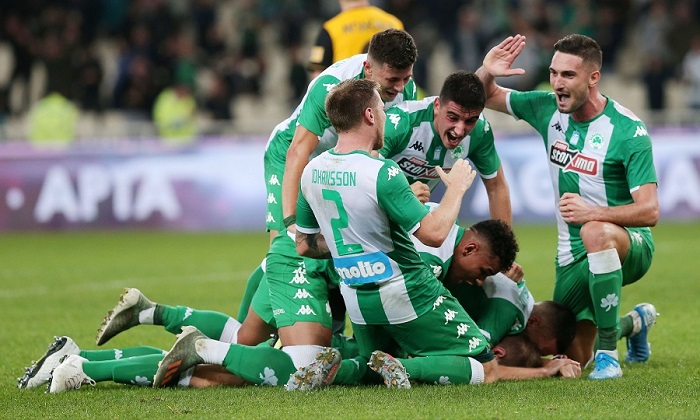 Panathinaikos came back from 0-2 down against AEK to celebrate an improbable victory 3-2 for the Greek Super League at the Olympic stadium on Sunday.
Goals from Michalis Bakakis and Nelson Oliveira put AEK in firm command of the match before half-time, but Panathinaikos battling young side had other ideas.
Two goals within three second-half minutes from Federico Macheda and Juan Jose Perea leveled the match, and substitute Dimitris Kolovetsios popped up to win it for the Greens two minutes from full-time.
AEK is now nine points off the pace, in third, while Panathinaikos has climbed to eighth.


Olympiacos retained its two-point lead at the top with two goals in as many minutes around the hour mark by Daniel Podence and Hilal Soudani to defeat Atromitos 2-0.

The Reds have 26 points from 10 games, with PAOK on 24 after its 1-0 victory at OFI on Saturday courtesy of a spectacular long-range shot by Josip Misic early in the second half.

In the other weekend games, Aris beat Asteras Tripolis 2-1 to rise to seventh, Volos overturned a 1-0 deficit to defeat Panetolikos 3-2 at home, and Panionios scored its first away win of the season upsetting Xanthi 2-1.
On Monday Larissa hosts Lamia, and if it wins it will climb to the third spot.
Table 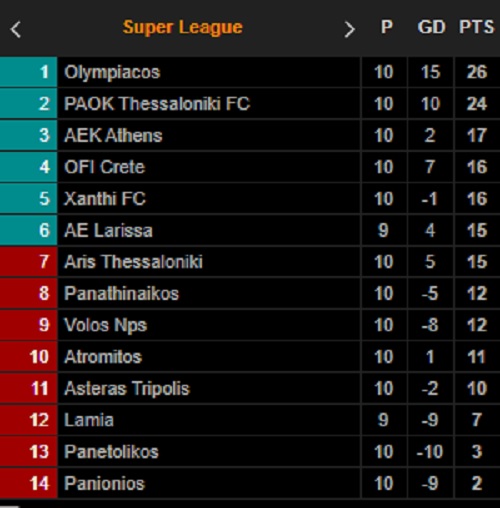