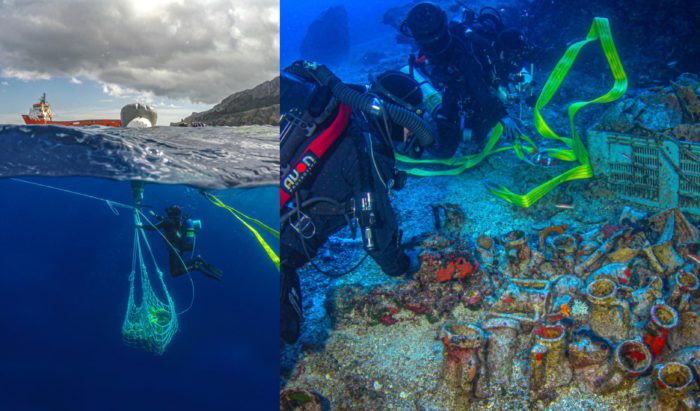 Greece’s Ministry of Culture issued a statement on Friday informing the public about the new discoveries made recently at the wreck site which once yielded the “Antikythera mechanism” off the island of Antikythera, south of the Peloponnesian peninsula.
The statement noted that ”bones were collected, which now need to be analyzed, (as well as) olive kernels, and bronze nails from the ship as well as a bronze ring, whose use remains unknown.”
Among the findings which were discovered were sections of the bodies of ancient amphorae, as well as the bases and the necks from the main bodies of the vases.
The types of amphorae are identified as those which were typically used on the island of Kos and in Southern Italy in ancient times.
The Greek Ministry noted ”This scientific mission of October 2019 completed the first five-year research program. Based on the results of the latest research, preparations for the new five-year program, starting in May 2020, will begin immediately with the continuation of excavation research in various areas of the wreck, where there are good indications that impressive new findings will come to light.”
“The mission was concluded with great success despite adverse weather conditions and the limited length of time for the rescue research,” the Ministry added.
A large team of Greek scientists carried out the delicate mission of recovering the antiquities from the site which once uncovered the unique type of ancient brass computing mechanism, known as the “Antikythera machine,” which could predict the positions of the stars.
This latest research at the famed shipwreck site was made possible by support from the Athanasios Laskarides Public Benefit Foundation.