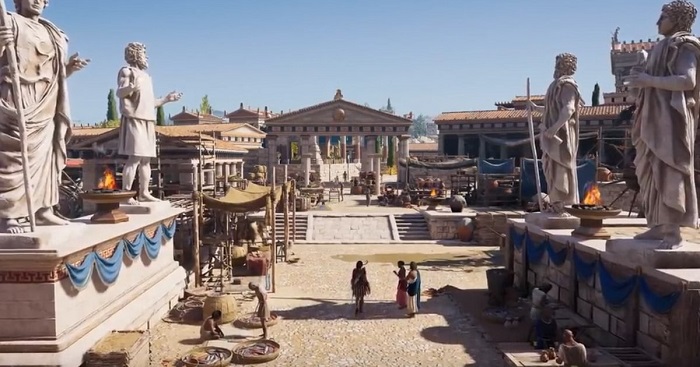 A history teacher in Belgium has developed a new video game together with French video game company Ubisoft to teach children about ancient Greece, the Brussels Times reports.

Students in their second year of secondary school (age 13-14) from the GO! Middenschool in the municipality of Geraardsbergen in the province of East Flanders will learn all about ancient Greece through the fascinating new video game.

“The students will travel over 2,000 years back in time in the game to the Peloponnesian period, when Sparta and Athens were at war,” history teacher Michaël De Borre told the newspaper.

“Gaming can be used in a positive way. We developed an entire educational tool that completely recreates ancient Greece, from Macedonia to Crete, from Sparta to Athens, everything is in there,” De Borre told interviewers.

“Ubisoft has worked four to five years to develop this game. They worked together with historians and even went to Greece for several months to make it as historically accurate as possible,” the teacher added.

There are 20 PlayStations in the classrooms in Geraardsbergen, since they are cheaper than computers. “Each class of the second year will have to take turns to do an assignment. They have to compare Athens and Sparta, which are the two most important and largest city-states of ancient Greece,” De Borre explained.

The game begins on the Akropolis in Athens, but the students will have to choose their own route and manner of travel in order to reach Sparta. They can either walk, ride a horse or board a ship to reach their destination, according to a report from the news website VRT NWS.