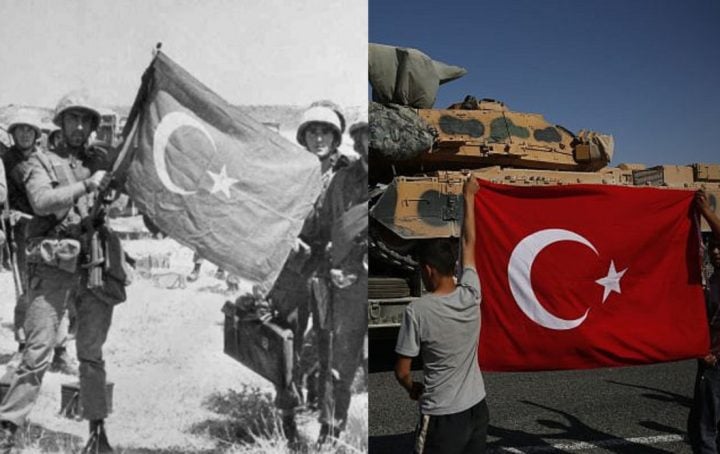 Turkish President Recep Tayyip Erdogan said on Monday that his country’s intervention in Syria is as vital to Turkey as its invasion of Cyprus had been in 1974.
Speaking in Baku, Azerbaijan on Monday, President Erdogan referred to the Turkish assault in northeastern Syria, saying that his country will not cease its military operations there despite a widespread international outcry, European warnings and tough American sanctions against Ankara.
”We will finish what we began. A Turkish hoisted flag does not come down,” Erdogan said in his typical bombastic manner, describing how important this new military campaign is for Turkey.
In a sense, by making a clear correlation between the illegal invasion and occupation of Cyprus’ northern third by the Turkish military, President Erdogan seemed to indirectly accept the fact that his country’s offensive in Syria does actually violate international law and the sovereignty of a neighboring state.
However, he seems determined to go ahead with his controversial moves, which threaten not only regional stability and peace but jeopardize a future resurgence of ISIS terrorism in Europe and beyond.
Turkey invaded the northern third of the island of Cyprus in the summer of 1974 and has illegally occupied that territory ever since, in defiance of international law.

The Nea Moni Monastery on the Greek island of Chios is a treasure from Greece's long history, now listed on UNESCO's World Heritage List.
Greek Food

Trachanas is a staple Greek recipe ready in minutes, filling, and full of vitamins. However, the process of making it actually takes months.
Europe